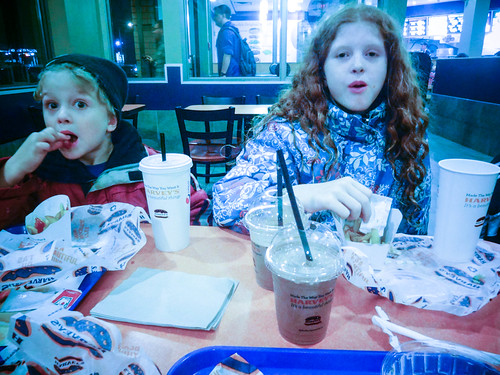 Sometimes it looks, from the blog, like I’m hyper-productive. And sometimes that’s true. But not always. Today, for example. Today I got up at 5am, yet I’ve done nothing more productive than a load of laundry. I just heard the washing-machine buzzer go, so if I get up off of this twirly stool (formerly part of a drum kit) and toss that load into the drier, that will be two loads of laundry, making me twice as productive.

I exaggerate only slightly. 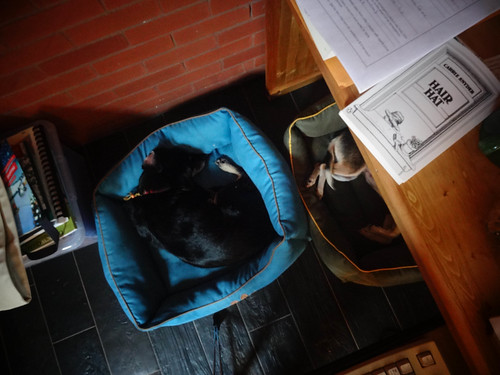 office, with dogs, Monday, around noon

I took photos of most of the places I’ve been over the past two days. Maybe I need a day like today to do nothing and not be productive, who knows. A body can get tired, and so can a mind, worn down and flattened to dullness by the necessity of production. My energy and drive are renewable resources, but maybe to renew them, I need to sit fallow now and again.

Here’s where I’ve been, since leaving the wild Wild Writers Festival on Saturday afternoon, flying home filled to brimming with words and names and ideas and emotion.

That same evening, Kevin and I went out together to a dinner hosted by the festival, and then to a reading afterward. It really is a treat to be surrounded by writers, to hear about their struggles, and their secrets to survival. I rely on this blog, frankly, to keep me connected to other writers, because I really don’t move in literary circles. My actual physical circle is basically my neighbourhood, and includes friends I’ve known for years, and friends I’ve made since having children. In some ways, I think I’ve been protected by this, and allowed to make my own mistakes and explore my own interests, but in other ways, I miss the camraderie of running into people who do what I do. It’s why I love the Wild Writers Festival, and feel blessed by its existence, and thankful to those who put their energy into bringing it into being.

Kevin and I did not stay late. That is the theme of our lives at present. We do not stay late. Ergo, our social lives are somewhat shrunken. I wilt around 9 o’clock. That’s my glass slipper hour. 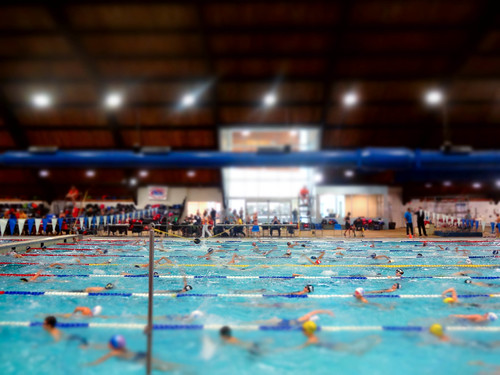 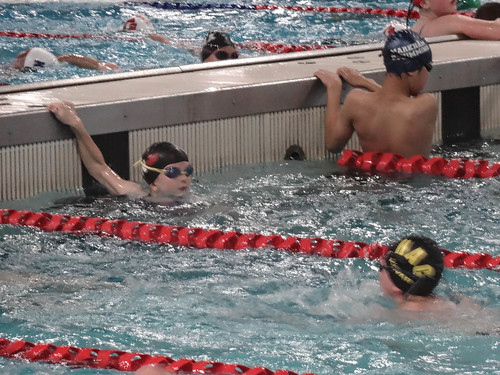 Sunday saw me and swim girl driving rainy country roads to a swim meet. It was her second day, and she’d already won a bronze medal in the 200m breaststroke (looked after by her coach, as neither Kevin nor I could be there). I failed to appreciate the significance of this accomplishment until arriving at the meet: it was a big meet! Teams from all across southern Ontario, from Toronto to Windsor, and there was my kid in her purple suit swimming to another medal — silver, this time — in the 100m breaststroke. I got to hug her immediately afterward. I spent much of the meet crouched on a stair-step on the jammed pool deck, reading Ann Patchett’s THE STORY OF A HAPPY MARRIAGE, and wishing myself more tolerant of violations of personal space. I’m so Canadian that way. 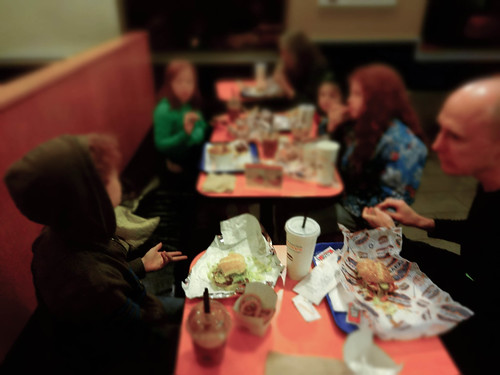 Home from the swim meet, we went out for a family meal at Harvey’s. We had a gift certificate, that’s why. It was ridiculously fun. Hey, maybe we can count it as our Canadian celebration.

Up early yesterday for kettlebell class. I’m back! And symptom-free! And my muscles ache! So yesterday was kettlebells, followed by nap, followed by getting kids to school, followed by office time. Blissful peaceful office time, with dogs snoring underfoot. I’m sifting through my HAIR HAT stories. Not much happened for many hours, and I enjoyed it. Because by 3pm it was kids home, and snacktime, and laundry folding. So much laundry! Three days of laundry! Despite a full half hour invested in folding, I had to abandon the still-overflowing basket because it was time for the hellish Monday swim commute. From our house to UW’s pool (where AppleApple swims) to the Rec Centre is probably less than 4km, all told, if we could go by bike or on foot through the park. But we can’t (aka don’t want to) because it’s dark and snowing. This trip via car, is beset by road closures and heavy traffic, and takes us a full half an hour. We arrive at CJ’s swim lesson just in time, every time. 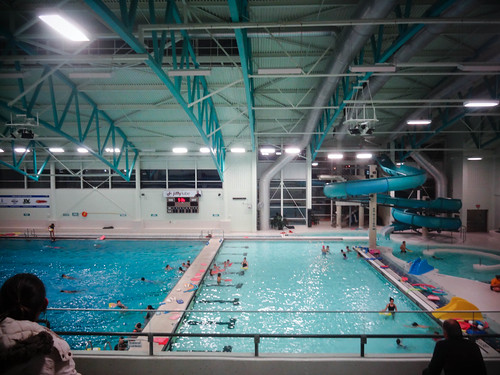 swim lessons at 5:30 on a November afternoon

I sit in the stands, and breathe. I watch him kick, kick, kick, and move less than an inch, yet he doesn’t seem discouraged. His googles (as he calls them) are too tight and leave marks around his eyes, yet he doesn’t me to loosen them. He talks non-stop in the shower, by the locker, in the parking lot, all the way home. This is a good stop along the way.

At home, there are 15 minutes in which to devour a tofu stir-fry that Kevin’s whipped up in my absence. My mom has arrived too, to babysit and let us borrow her car for the next portion of the evening’s adventures, as Kevin and I will be going in two different directions. 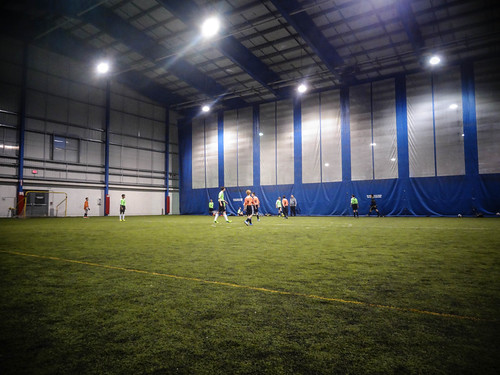 I get to go to Albus’s indoor soccer game! I don’t do enough with his boy, and he notices, so I’m making a conscious effort to do more. I believe showing up is a big part of parenting, and matters more than anything I could try to say with words. And it’s doable: it just means shifting things around a little bit, here and there. Kevin will take the gymnastics run (Fooey and her friend) and pick up AppleApple from swimming, instead. It’s companionable with my boy, and I manage not to embarrass him with my (inevitable) running commentary and encouragement from the sidelines, if only because he claims afterward not to have heard me (phew!). 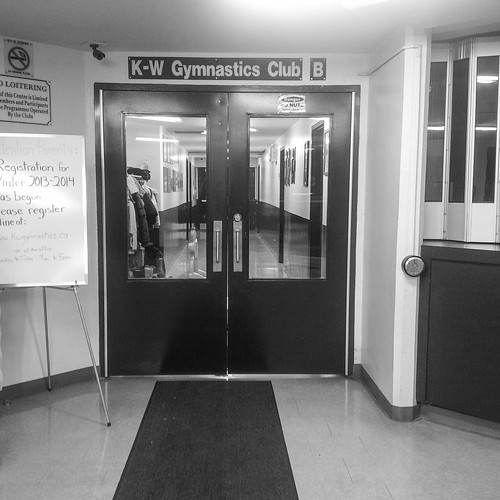 We’re home again. I help load the dishwasher. I dress CJ in pajamas and leave the bedtime tucking to Kevin, because we’re off again, me and Albus, to stop at a convenience store for milk and bananas on our way to pick up the gymnasts. “I forgot my camera!” I say, and Albus reminds me that phones have cameras these days. I finish off the mini-this-is-where-I’ve-been session with a few terrible shots from the gym. 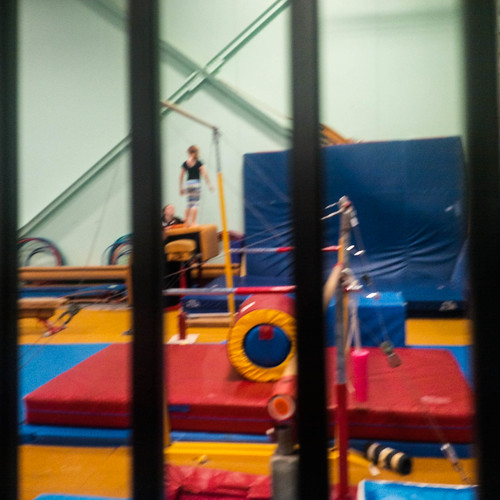 And that’s where I’ve been.

A wild Wild Writers Fest
Be forewarned and be reassured