On becoming a writer of historical fiction 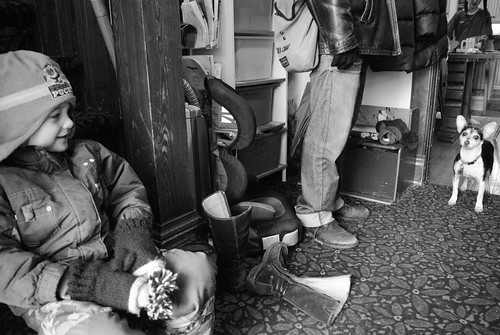 getting ready for school

Awaking out of my comforting morning nap, a number of blog post subjects floated to the surface along with me, and then apparently floated away on a light breeze because I can recall none of them.

Oh, yes, I remember one thought. Back in undergrad, I had a fascination with a 16th-century poet who published a handful of poems in the popular press, and who identified herself as a woman: the first known to do so, though of course, the popular press meant these weren’t poems printed in a bound book, but poems printed in short runs on a few sheets of paper, rather like an advertising flier — “popular” as in cheap and meant to be easily available, light entertainment, easily consumed — so there may have been other women poets before her, lost to the recycling bins of time, or others who published but did not identify themselves as women (as is apparently the case TODAY for many female bloggers who write on “male” topics like science and technology). Anyway. As I’m writing this out, I’m realizing how much more research I would need to do into the physical details to really get this right, but the point being, I had a fascination with a female poet who published in the second half of the sixteenth-century (that’s Elizabeth I’s era) in London, England, and because almost nothing is known about her life, I imagined a life around her, and she’s remained a character of interest to me, in an era of interest to me.

About a century later, the first handbook on midwifery that was written by a female midwife was published. (Male midwives had published other handbooks before her; and yes, there were male midwives in 17th-century England.) I read that handbook for a research paper a few years ago, and was horrified and fascinated by the techniques and remedies recommended therein. I’ll spare you the details, or perhaps save them for a book. Let’s just say, midwifery through the ages was not for the faint of heart. And that was the thought that bubbled to the surface this morning: somehow linking these two women and writing about them. Do they belong in the same book, separated by nearly a century? Could I take liberties with time? I’m a fiction writer! Of course I could!

The key will be discovering the plot that might emerge around two such characters. Or perhaps she is only one character. I won’t do all my thinking out loud, here, promise. But my mind is drawn to starting up a new, big project, and having just completed a manuscript of what I’d have to call historical fiction, I’m thinking, hey, I liked that a lot. I could write more of that. Plus, I’d get to start with one of my favourite past-times: research! Maybe I could even hang out in a rare book archive, like the one I used to frequent as a grad student in Toronto.

Writing in the present is trickier. Habits and moral codes change, trends and brands and music and tastes in colour and fashion and food all change at a rapid pace, important details the inclusion of which may stale-date an offering before it comes close to publication. I’ve never been cool anyway. I don’t have my finger on the pulse of the zeitgeist. I’m not going to write today’s version of “Generation-X,” like Douglas Coupland. (Although, as an aside, I do enjoy tapping away and adding to and subtracting from a never-finished manuscript set in the present, which I find endlessly amusing, but regrettably plotless; it reads rather like a series of sit-com scenes.)

This is no way to conclude a blog post, and yet, I shall.