Random fact: I got hit on the head with a soccer ball 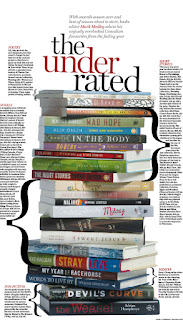 My hair looks good this morning. So far, the only people aside from family to have seen it have been the school bus driver (who wears a knitted toque himself) and a man walking a dog (which sniffed me; dog, not man).

The school bus was late this morning.

I didn’t eat breakfast until after doing the dishes I should have done last night.

I was too tired to do dishes last night, or even to function as a responsible parent, and instead fell into a deep sleep on the couch while my children entertained themselves in the new Lego play area. Bits of their play drifted into my dreams. I swear they’ve got a game going on right now that involves taxation for the benefit of the greater good. CJ wasn’t keen to pay his taxes. This caused problems. (Meanwhile, Kevin took the dogs on a car-ride to pick up a child who’d been at a birthday party playing laser tag, much to the envy of her military-minded brothers, who bring me to grief regularly with their battle play. War is not a game! I feel this deeply! And yet my boys — yes, boys only — take great pleasure in imagining themselves blasting imaginary opponents with imaginary weaponry. Is this play harmless? Inexcusable? Inevitable? A necessary fantasy? Related to their genitalia? This aside is getting way too long, but I want to add an aside to my aside, and ask: Are humans hard-wired to desire conflict? Is conflict itself a kind of fantasy that helps us escape from the boredom of our adult responsibilities?)

But my teammates have found out that I’m a writer, and one of them had actually heard of The Juliet Stories!!! Because someone at her book club had recommended it!! Which is really quite thrilling because it means the book is making noise enough to get through to new readers! And that is all an obscure CanLit writer can really hope for. (Maybe it helps that The Juliet Stories has been noted on end-of-year-best-of lists in The Globe & Mail, the National Post, and K-W’s own The Record? Do people shop off these lists? Do you? Do I?)

Driving home after my soccer game, I wondered, am I more fuzzy-headed than usual? But it was hard to tell whether it was ball-on-head-induced fuzziness or up-before-dawn-driving-all-day fuzziness. My big girl had a swim meet on the east side of Toronto, which required us to be poolside at 8 in the morning. She is not a morning person. She also gets carsick.

It was raining. The trip was by turns exciting (when we picked up coffee and bagels for breakfast from the sweet-smelling City Cafe Bakery on our way out of town), uneventful (safe driving), and tedious (nothing on the radio; aforementioned carsickness). She won both of her heats.

I missed seeing the second one because I was chatting with a dad sitting next to me, whose daughter happened to be in the same heat, so we shared the parent-guilt equally. (Random fact: I enjoy chatting with people I will never see again.) Anyway, AppleApple and I decided to skip her last race of the morning because it meant we could just make it to her soccer game in nearby Mississaugua. Her team won. I observed several girls heading the ball properly. We were then home in time for me to change and get back into the car to drive to my soccer game.

All of this activity involved way too much driving. I found myself making up the lyrics to a sunny little song: “I’m driving all day in my car / it’s really not that hard.” Sitting in the driveway, back home again, I felt this strange attachment to the car, as if it had become a cocoon world of slightly stale bagels and cold coffee and radio talk, temperature controlled, seat-adjustable. I didn’t want to go anywhere else. But I didn’t really want to get out.

Eventually I did. And then, it must be said, I really really didn’t want to get back in again.