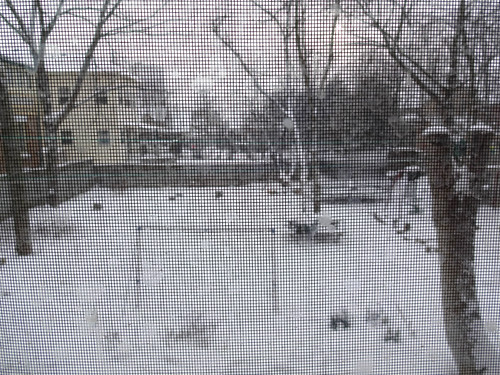 I’ve been re-reading old blog posts. The photos are fun, but it’s the changes that are most remarkable to see in fast-forward (or fast-rewind).

Consider the post from Monday, May 18, 2009, titled “On Endings,” which seems rather appropriate for this last day of 2012. In this post, I’m writing about trying to finish a story, one that would become, in one way another, part of The Juliet Stories. I am amazed by my own resolve under circumstances that look, from this vantage point, very difficult indeed. My youngest was not-quite-fourteen-months. My eldest was not-quite-eight. I was home with the littlest children full-time, and I was finding it trying.  Kevin was recovering from a broken knee. Friends had been bringing us meals (bless you, friends!). We’d had “the barfing thing” four times in four months. I was sleeping sporadically, still nursing at night. I must have been utterly exhausted. No time for exercise, no time even to imagine exercise — who could get up early after being woken half the night?

And yet, I was writing.

There was no guarantee that what I was writing would become anything anyone would ever want to read, let alone publish, let alone nominate for a major prize. I was writing because I had to write this particular story, in this particular way. I was doing what I had to do, and if there is a lesson in here, it is simply do what you have to do. Don’t look for reasons not to do the things you have to do. Come alive. Do! I think that even if that story I was writing had not turned into The Juliet Stories, it would have been worth writing, because it brought me hope, because it gave me space and allowed me to dream.

In the blog post “On Endings” from May, 2009, I reflected on a documentary I’d just seen on the photographer Sally Mann, an artist who was suffering from doubt and set-back — and yet her art seemed without question worthy and beautiful. How could she doubt?

Here’s what I wrote in response:

“There’s no telling whether these years of work will this time add up to something of beauty and merit, but I felt a kinship watching her [Sally Mann] struggle, mourn, reflect, create. It’s a blessing and curse to want to translate experience into art — not just to want to, but to do it. The work involved. Working toward an end you can’t see until you find it. Will it be whole, or still-born? All the infinitessimal choices along the way that shape the final artifact, that leave you wondering — why this and not that? So much room for criticism, self and other. There’s the artifact created, and the one intended, and the multiple ones that might have been.”

Weirdly, I see that her art show was titled “What Remains.” I say weirdly because that very nearly became the last line in the epilogue to my book, but we decided to cut it. I’m still not sure about that cut. It’s the only one I question and wonder about. This is the ending that almost was: “Tell me, for I need to know. What remains?”

I have a million other things I’d like to blog about, here, as we stand on the threshold of a new year. These are all on my mind: Chief Theresa Spence’s ongoing hunger strike; the need to protect and cherish the land we live on, the air we breathe, the water we drink; the nihilism of a sub-group of young men, worldwide, who commit acts of terror, from the random-seeming shootings in the United States, to suicide bombers elsewhere, to the violent rape that is moving protestors in India to rise up against a casually misogynist culture. There is more, I know. I wonder, will this be a year in which protest brings about hope and healing? What is my (small) part in creating a more hopeful world? We all long for peaceful communities, whole relationships, happy families. We are imperfect.

We work toward ends we cannot see.