Our Halloween: the good, the heartwarming, the parenting fail 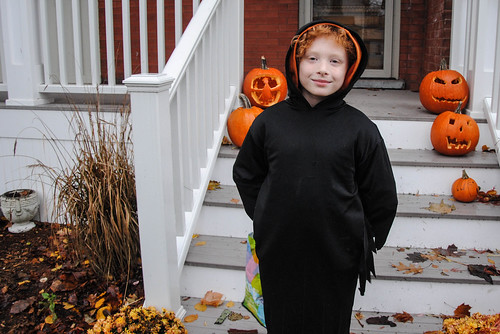 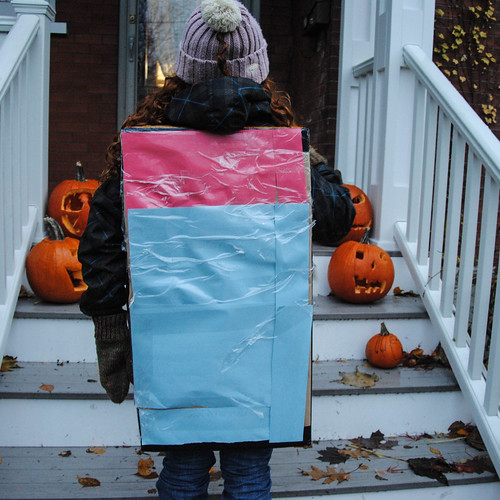 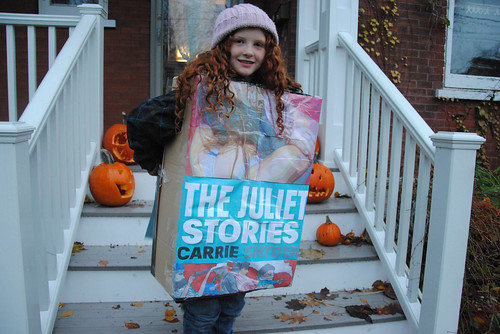 seriously, when she said she wanted to go as a book, I had no idea which book she had in mind 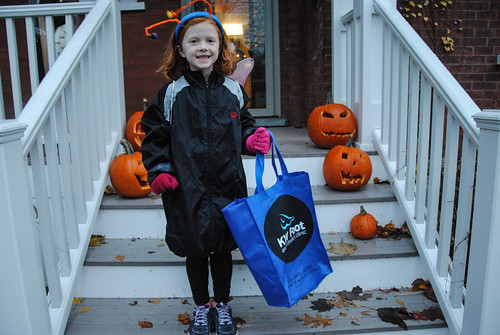 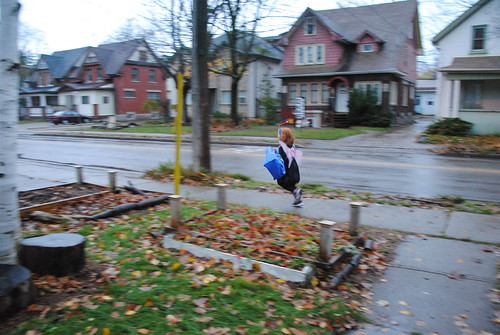 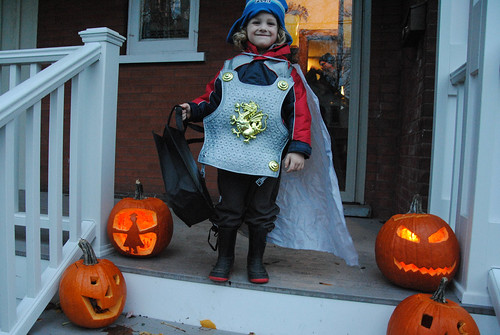 and the knight is the last to emerge

This was the actual order in which they exited the house.

The book also trick-or-treated with friends, and stayed out latest of all. She arrived home saying her favourite house was the one where she heard adults on the porch saying, “Hey, it’s The Juliet Stories! Isn’t it up for a prize or something? I heard the writer lives in our neighbourhood!” And then she was proud to tell them: “My mom wrote this book.” She was hampered, however, by the costume design, which went down a little long in the legs, making step-climbing tricky. (And I worried that neighbours might suspect I’d sent my kid out as a walking billboard …)

The butterfly and the knight came with me and some friends.

There is a great article on the joy of Halloween in the Globe and Mail this morning (which I’m still reading despite resident-books-writer John Barber’s seemingly bottomless dislike for contemporary Canadian book publishing). I felt the Halloween magic yesterday evening. The decorated houses, the efforts to entertain and welcome. Children knocking on strangers’ doors and receiving compliments and candy.

The butterfly and I outlasted the knight, and made an effort to visit our nearest neighbours, who don’t get many trick-or-treaters. Our street is busy with traffic, and it is populated by more of a mixed crowd than the family-oriented streets that surround us: students, the elderly, people who have lived here for decades and haven’t renovated their kitchens and never will. We knocked on some doors I wasn’t sure about, even with the porch lights shining. And at every one we were greeted with welcome and kind words — and treats. The students who had dressed up their cat as Superman. The man whose wife came quickly to tell him what to do with Fooey’s treat bag, which he’d taken into his own hands, and stared into as if trying to decipher its purpose. The neighbour who recognized me from the article in the Chronicle and said, “You wrote a book?” as if he were saying, “You’ve been to the moon?” 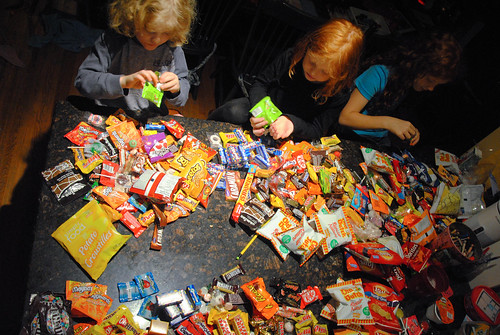 Back at home the candy-eating and sorting was well underway. Our littlest ate candy like I’ve never seen a child eat candy. He just didn’t stop. I was entranced by his enormous appetite for chewy faux-fruit-flavoured sweets and I stood by his stool watching him with amazement and, I’ll admit it, admiration. When apparently, as evidence would show, I really should have stopped him.

Parenting fail. Yes, parents of four can make rookie mistakes on the last kid. How were we to know? Our other kids have all shown restraint, over the years. Not one of them has ever eaten themselves sick. Which is exactly what happened to CJ last night: he ate himself sick. Even when we declared it cut-off time for candy-eating, he would have gone on; but then he rolled off his stool and collapsed to the floor, holding his tummy. “It hurts!”

I tucked him into bed, hoping he’d wake up feeling better. But instead he woke up feeling worse. It was one o’clock in the morning. I won’t paint the scene for you, but suffice it to say, his stomach didn’t even bother trying to digest those masses of chewy faux-fruit-flavoured sweets. The cleanup took a long time. And then I got up early for spin class. Ouch. This is not an error we intend to make more than once.

At least he felt instantly better. 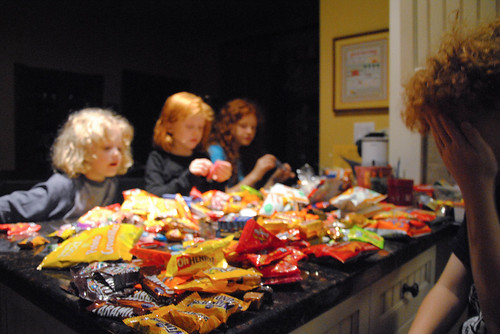 my favourite photo of the evening, which sums up the agony and ecstasy of excess: view on Flickr for full scene

Work at home: the after-school shift
Catching a glimpse of the wild writer