Tuesday hodgepodge, with a recipe for green tomato relish 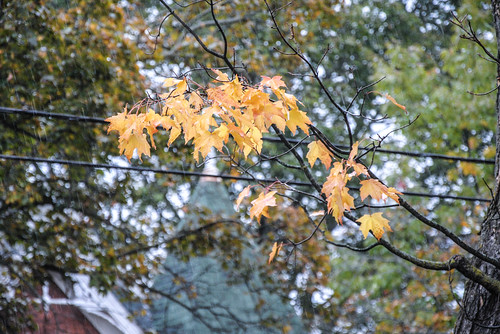 I’m visiting a book club this evening to discuss The Juliet Stories. I’ve got beans soaking for supper. And the sky looks white from where I’m sitting. The dogs are sleeping on top of each other on the couch. I searched the attic for winter hats and gloves this morning. And I ran 6.5km in half an hour, but my watch told me I’d run 7.8km, so I was a little disappointed (even though I realized that it had to be off — I’m not an under 4 minute/km runner).

The turkey was fabulous this weekend, but I took no photos. The last-minute prep got a bit hairy, so I forgot to use my camera altogether. But I spent the better part of Saturday in the kitchen, cooking a feast for family, and I can’t think of any other way I’d rather spend my holiday. On the menu this year: turkey, gravy, traditional bread stuffing, garlic mashed potatoes, mashed squash with brown sugar and ginger, brussel sprouts with pecans, and green salad. Pumpkin and apple pie for dessert (not homemade), with freshly whipped cream. I stuck with the basics. What could be better? There were 13 of us around the table, and we ate almost an entire 14 pound turkey; cleaned up the leftovers for lunch the next day: turkey and cranberry sandwiches, with green tomato relish. 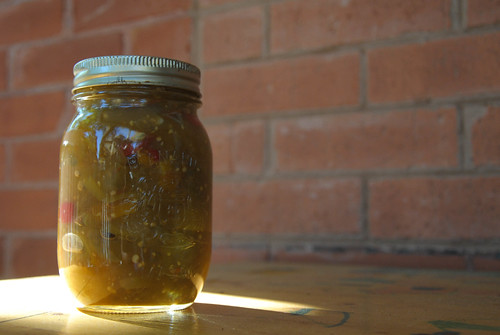 Which reminds me, some of you have requested my green tomato relish recipe, which I hesitated to post until ensuring it was good. Well, I’ll be darned, it’s good. We ate almost a pint of the stuff for Sunday’s lunch. Here’s the recipe (and be warned, it involves a lot of weighing — we actually dug out a scale from the basement for the purposes of making this relish; and then we all weighed ourselves too, just for fun.) Also observe: we canned spontaneously and had to make lots of substitutions.

Combine in a large bowl: 8 pounds of green tomatoes, thinly sliced, and 2.5 pounds onions, thinly sliced, sprinkled with 1/2 cup salt. Stir well, cover, refrigerate for 12 hours. (Confession: We were short on time, so ours sat for about 1 hour.) Rinse the tomatoes and onions in cold water, drain.

Now, in a large nonreactive pot, bring to a boil and dissolve 2 pounds of brown sugar in 1 and 1/2 quarts cider vinegar. (Confession: We substituted at least a pound of white sugar, and 1 quart of white vinegar. I added some extra sugar before canning, too, to taste.)

Add tomatoes and onions and stir together well.

In a moist square of cloth, tie together the following ingredients, and add the cloth to the pot: 1 tablespoon whole cloves; 1 tablespoon ground ginger; 1 and 1/2 teaspoons celery seeds; 1 cinnamon stick broken into pieces. (Confession: We had no celery seeds. We made no substition for that lack.)

Simmer, stirring often, for about an hour, or until tomatoes become translucent. Can while hot in a boiling water canner: 15 minutes per pint or half-pint, 1/2-inch headspace. 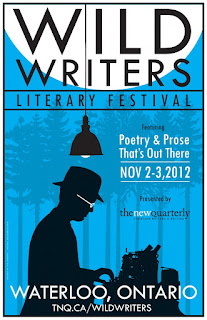 I’m putting up a link to the Wild Writers Festival, which is a brand-new literary festival here in Waterloo, coming on November 2 and 3, and bringing to town a really fabulous line-up of writers, including Diane Schoemperlen, Russell Smith, Alexander MacLeod, Helen Humphreys, Alison Pick, Merilyn Simonds, Miranda Hill, Elizabeth Hay … see, I don’t want to stop listing names, they’re all so terrific. Personally, I’m hoping to pop in to Kerry Clare‘s blogging session, which is right before my panel discussion. Spread the word! And come if you can!

(And if you’re in Toronto, please know that Waterloo is closer than you think, and that you’re coming to one of the prettiest parts of the city, which just happens to be my neighbourhood — the festival is being held at the Balsillie School of International Affairs.)