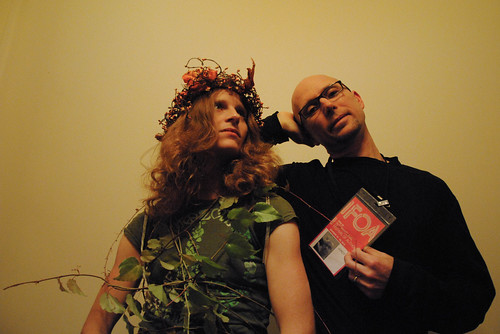 If you read my blog you’ll find Kevin’s Halloween costume funny (I hope); everyone else will just be baffled (especially because Kevin never remembered how to pronounce his last name). At the party last night, Kevin spent a lot of time explaining to everyone else who he was, and why. I spent a lot of time eating cheese and pickles and olives and cheese again. Wasn’t sure I’d make it into party-land standing, let alone wrapped in vines plucked off the side of our house, but a nap with the dogs on the couch gave me a couple more hours of stamina.

Yesterday was a Chapters day, and I enjoyed myself despite (because of?) spending five hours behind a table stacked with my books, smiling and waiting for people to approach. Thankfully, many friends turned up — for the hugs, right? One bought me a coffee and a protein box from Starbucks, which lasted all afternoon. And I sold a bunch of books, and not only to friends. I tried to tailor my pitch to whomever was approaching. Mention the setting? But offset it by adding, “It brings a child’s innocence to a politically-charged situation.” (Thanks to Charlene Diehl for the suggestion: I was riffing about pitch ideas on Facebook during the slower moments yesterday.) I also said that it was a good book club book, and I’d got strong and heartfelt responses from readers. I used vague phrases like: “mother-daughter relationships,” “family drama,” “memory.”

During a mid-afternoon lull, I had four back-to-back long conversations with people who apparently were just looking to chat and didn’t buy the book (that was a low point). I gave advice on how to get published. I declined free manuscript reading. One woman said she rarely reads in English (she is French), but that she felt extremely drawn to the book. She stayed for a long time, but never quite made the leap to purchase; I wondered whether I should have pushed her harder, but pushing is not really my forte. My inner-Menno recoils in horror at all this self-promotion. What if I’d said, “Maybe there’s a reason you’re being drawn to the book.” But I couldn’t, and didn’t. (But I’ll admit I wondered afterward: maybe there was a reason.)

A woman originally from Romania said she thought it would be too close to her own experiences to read, and apologetically walked away; but then changed her mind and came back all in a rush and bought it as a gift for a friend.

Mid-afternoon I posted on Facebook that no men had yet to buy my book, but lots of them were smiling at me. Of course, three minutes later a man bought the book. By the end of the afternoon, I figured about half the sales had been to men. Some were buying gifts for their wives. One had never met a writer, and complimented me on my author photo. He’s the one who had the best line of the day. After I’d signed the book for him, he said, “Damn, I should have had you write ‘Thanks for a wonderful night!’ so I could show it to my ex.”

See. I wouldn’t get any of this stuff if I’d stayed home instead.

This morning I listened to an interview with Junot Diaz (the real one) on YouTube — Kevin had found it while researching his costume. I guess this is one way to discover a new writer — be mistaken for him. It’s a very long interview, but if you’ve got time while kneading bread or doing dishes, listen in. I started around the 19th minute, where he’s talking about the book being an archaic medium because it moves at a human rhythm, not at the rhythm or speed of a machine; it’s archaic because we have been trained to become machines, and to forget that we are humans. He also said that to find something new, you have to first be lost.

I resonated with so many of the things he was saying, and I think other writers will too. (Be warned: he did use the F work often enough to interest Fooey, who was playing in the living-room. “It’s that word Mommy uses when she’s driving,” she said. Argh! I keep promising the kids I’ll stop swearing in the car, and I keep failing miserably. Just like a human or something.)

Come see me at Chapters today, starting at 11am
Obscure CanLit anxiety dreams