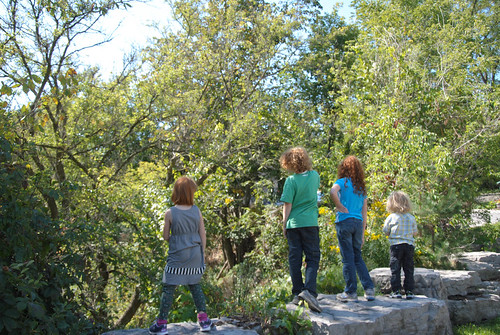 In any case, on Sunday, I read at Eden Mills; and we brought the kids along. There was much complaining about being forced to spend the day doing something other than lounging in pajamas in front of a screen. I’m obviously parenting badly. I assured them that Writers Festivals were Fun, but they weren’t buying what I was selling. We proceeded to spend approximately 85% of the car ride being tormented by one child who kept repeating, “I’m bored! I’m bored! I’m boooooored!” I wish I were exaggerating. This monotonous soundtrack was occasionally interrupted by a) the same child hollering, “And no one’s even listening to me!”; b) other children screeching at said child; c) parents trying not to lose it. Fun times.

Luckily, the day was sunny, the townlet of Eden Mills was most welcoming (we were directed to our parking spot by no fewer than seven boy scouts/cadets), and we caught a ride up the main street on a golf cart, which the kids thought was pretty nifty.

Three of four children had never been to one of my readings. This seemed like the perfect setting to introduce them to this part of my job. But for the most part, the younger two didn’t really get that I was working. Eventually, I gave up and removed myself from their company for a few minutes of peace before the reading began — the new soundtrack at that point had become, “Why can’t I just have some ice cream!”(Yes, there was ice cream — see, told you, kids. Writers Festivals are Fun.)

I was reading with Dani Couture and Tanis Rideout, and we strolled together to the site — someone’s beautiful backyard overlooking a little river — which was set up almost like a Greek amphitheatre (minus the stones, and on a smaller scale), with stage down below and audience on the hill above. Upon arrival, I observed that my children and husband were arranged handsomely upon our picnic blanket. But perhaps they were a little too close to where the writers were seated. I could hear that the soundtrack was still going on, although sotto voce. “I want ice cream!”

I was reading last.

And so I sat and watched the slow motion hour-long crumbling of my handsome family. They were pretty well-behaved, all things considered. But I was cursing our parental lack of foresight — really, we should have gotten them the damn ice cream. After all, it was lunchtime, and then it was past lunchtime. 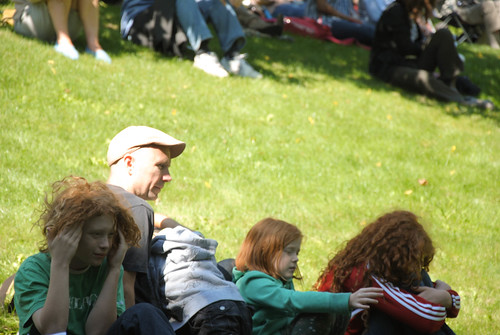 By the time it was my turn to get up and read, Kevin had retreated far away up the hill with CJ, who was quite far gone in ice-cream-starvation-mode. But my other three children stayed to listen.

Afterward, Albus whispered, “That was really good, Mom!” And Fooey wondered whether Ronald Reagan was a real person. And they all said that Writers Festivals really weren’t so bad after all.

So it was worth it.

And then we got ice cream. And hot dogs. And soda pop. “This is full of vitamin C,” one of my brilliant offspring proclaimed. We checked the label. And I regret to report that Orange Crush offers not a jot of vitamin C. It is, in fact, 0% vitamin C.

We were a much jollier bunch driving home, all except for Kevin. The solo-parenting-while-Mom-was-in-work-mode had taken a toll on his ordinarily equable personality. And I, too, had to confess my exhaustion at the end of the day, saying, “I don’t really understand why, because I felt pretty calm all day.” Kevin said, “It takes a lot of energy to look that calm.”

And that’s the truth. 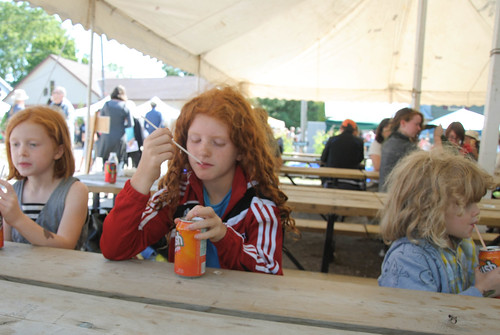 This is turning into a long long tale, and I haven’t even reached day two of Carrie aka Writer. But I shall go on (whether you go on with me, I leave to your discretion.)

Yesterday, I led writing workshops at a camp near Eden Mills. It felt like a real “working mother” day, which is still a bit novel to me. I left the house before the kids had woken. Kevin kept me posted by texts. Four of us — me, Evan Munday, Tanis Rideout, and Angie Abdou — led small groups of high school students in hour-long writing sessions on different subjects. (I did the short story.) The kids were willing to write and share their work, and I found the sessions very pleasant. I also appreciated being amongst other writers, since I spend most of my working hours alone in this office, wearing crocs at one end, earplugs at the other. When we first met, Angie said, “Oh, you wrote that blog on not being on the Giller list!” which kind of made me cringe (this could be what I’m remembered for?), although she was very nice about it. Sometimes, in order to keep blogging, I forget (or ignore) the fact that blogs get read, and that the CanLit scene is pretty small.

Because here’s the thing. I do feel, when I make appearances in my writer hat/hair, like I’m dressing up to play a part. I know I’m not a writer with a capital W. It’s not that I don’t take my work seriously, because I do. But as much as I hope for worldly success, I appreciate the obscurity of my existence.

By the time I trudged, over-loaded and over-caffeinated, through the front door late yesterday afternoon, all of my children had miraculously gotten themselves home from school (this had been arranged with great forethought, but nevertheless seemed miraculous), and they were playing wii. Frankly, only the dogs were excited to greet me. I whipped up supper, hung laundry, supervised piano practice, checked email, we ate together as a family. And then I took the kids to the library and the grocery store — because it turned out that despite their lacklustre after-school greeting they had been missing me, enough to want to run errands in order to spend time together.

We had so much fun grocery shopping, I can’t even describe it. Everyone was feeling silly.

It was the best part of my day.

So here’s the sappy conclusion at the end of this long long post: Nothing makes me feel more accomplished as a human being than being happy with my kids who are happy being with me. Nothing.

(Although I suspect we appreciated each other all the more because we’d worked hard on our own, and we’d missed each other; do other working parents stumble into these puddles of mundane bliss, too?)

Today and tomorrow: Eden Mills
What my nap told me to do today