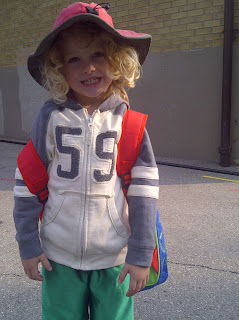 This morning I biked uphill with CJ “pedalling” on the trail-a-bike behind me. Why is our entire route to school uphill? Then again, the entire route home is the opposite. CJ chattered the whole way. He kept calling out questions, and I kept puffing out abbreviated replies, along the lines of, “Can’t talk! Trying to breathe! Keep pedalling!”

I saw some tears in the kindergarten drop-off zone, but they weren’t his, and they weren’t mine. On the whole, he was excited, although one of the last things he told me before we parked at the school was, “I’m feeling nervous, Mommy!”

We grabbed some photos on my phone, the bell rang, he got in line, he went inside. A quick kiss was squeezed in there.

Seven years ago, my baby, my firstborn, was that kid in the kindergarten line-up who was having hysterics and clinging to his mother’s leg. That mother had a two-year-old by the hand, and a newborn strapped across her chest in a sling. It was a really hot day. The pitying, sympathetic glances were numerous. I could almost hear parents thinking, Thank God that’s not me, poor woman.

I left the school in tears, my kindergartner wailing loudly and kicking the carpet in his new kindergarten classroom, his classmates observing him with vague curiosity.

“Don’t worry, we’ll call you if we need you,” the secretary told me, as she tried to get me to go home. I didn’t want to go home. I wanted to break into the kindergarten room and hug my screaming boy. But I went home. 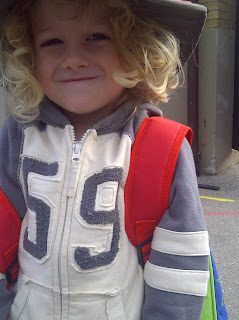 All was well when I came to pick him up several hours later, though I could hardly believe it. And he’s remarkably well-adjusted and sociable, so I don’t think the experience scarred him for life (though I wasn’t convinced at the time).

This is such a different experience. I felt so much more sadness over that first leaving, more grief about the passage of time. Maybe it’s having four children, and having gone through this ritual repeatedly over the years. Maybe it’s just about being ready.

But he didn’t look back as he walked into the school, and I didn’t wish that he would.

On napping, prizes, and obscurity
Look how we've grown