I found this post on my Facebook timeline (which was oddly compelling; damn you, Facebook, for finding new ways to help me procrastinate). I wrote it in the middle of February, 2011. But its information seems especially useful just now, in the midst of the harvest season, as I make an effort to fill the cold cellar, cupboards, and freezer. Though I haven’t felt very domestic this summer, somehow the arrival of September gives me the sudden urge to preserve. I feel it in the changing light and the leaves starting to fall, and the yellowing tomato plants: now is the time, hurry, hurry!
I had help this weekend. Caught up in a writing spell, and in possession of a bin of pears afflicted by fruit flies, Kevin offered to learn the fine art of saucing and canning. (Actually, it’s more of a craft than an art, and a bit tedious as he discovered, but he also discovered that he could can pearsauce while watching soccer. Win!) My mother told my aunt who was thrilled because apparently my uncle cans every summer. And then Kevin went to pick up kids at a friend’s house, and discovered that the dad was in the middle of — you guessed it! — canning. 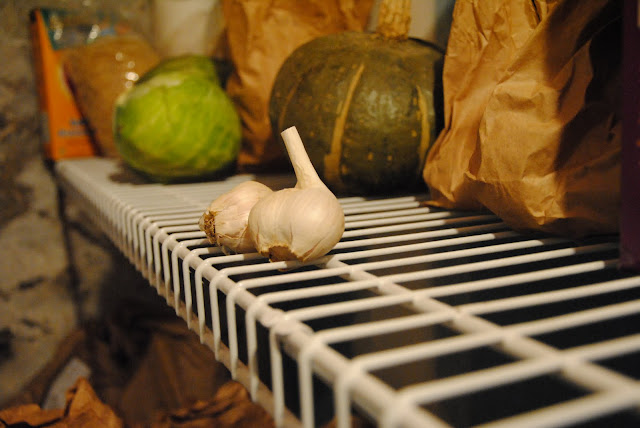 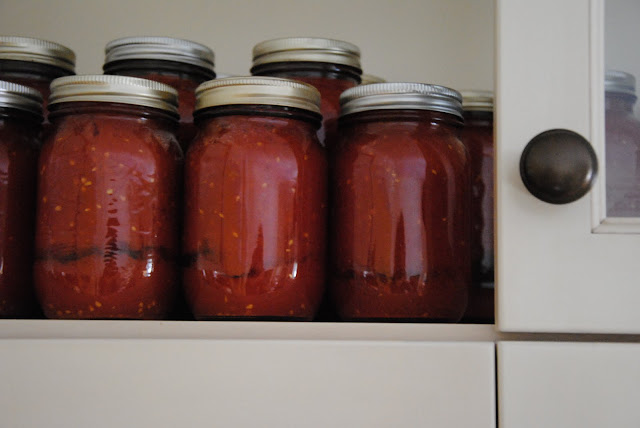 Some food stores well in our cold cellar. Some food does not. The sweet keeper squash is still going strong, but all other squashes are turning, uh, squishy. Squishes. We’ve kept them past their prime. Note to self: buy in bulk early in the season, eat lots, and by January at the very latest, shred and freeze the rest. Late February is too late. Although also note: some slightly squishy squash may be peeled and turned into soup.

Excellent keepers: garlic, stored in brown paper bags (I love my Ontario garlic! If you think you know garlic, and you’ve only ever met grocery store Chinese-grown garlic, I would like to introduce you to a whole different vegetable [is it a vegetable?]); potatoes, as long as you root through the big bag and compost any soft specimens–they keep best stored in smaller amounts in brown paper bags; beets, just like potatoes, only everyone gets much more tired of them, and kind of wishes they wouldn’t keep so well (though they do make good pickles).

Good keepers: apples. Our cold cellar can’t preserve them as well as Martin’s, our local apple farm, but we buy half a bushel or more at a time, and, stored in our cold cellar, they stay crispy ’til eaten. But we can go through half a bushel in two weeks, so it’s hard to put a fine end date on their cold cellar lives.

Decent keepers: yams, turnips, green cabbage, napa cabbage, pears. Lower your expectations. Don’t leave them to linger all winter long. Eat within the month (even sooner for the napa). We store them loose on wire shelves, with the exception of the pears, which are stored, like the apples, in a handy bin. The pears must been eaten within two weeks, we’ve found, and they rot deceptively, from the inside out.

Not to be kept in the cold cellar: onions, which apparently have an ill effect on apples, so we store them in a dark cupboard in the kitchen; and carrots, which keep best in the refrigerator. It’s not practical to have more than 10 lbs in the bottom drawer of the fridge, but luckily, through Bailey’s Local Foods, I can buy a new 10 lb bag every month. And when that’s not enough, I can drive to Martin’s farm and buy more.

In the freezer, which I’m digging into with ever more gratitude for last summer’s kept harvest, I wish there were more: corn and green beans. And less peas and beet greens. I am absolutely thrilled with the amount of plums and apricots, and the happy surprise of blueberries, (enough to get us through til April or May). But the frozen applesauce is wasted space. Note to self: can the stuff! My canned pearsauce has lasted til now (last jar opened last night). My tomatoes are hanging in there, but with an upswing in soup and stew production, the jolly red jars are beginning to dwindle. I must do a head count. I want them to last through May, and it’s time to start rationing. The frozen roasted red peppers continue to delight. And finally, I am happy with my frozen herbs, but could have frozen far more cilantro and basil, the latter particularly, because there is nothing like a heaping bowl of pasta with pesto to make a winter’s supper sing.