On my “meet the author” evening 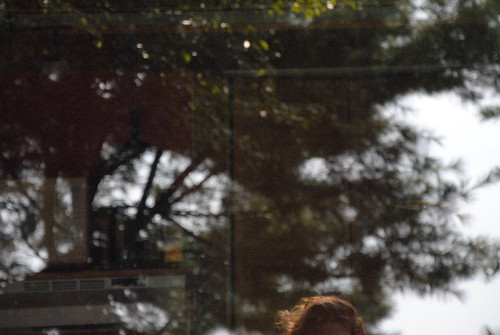 Yesterday evening, I did something I’ve never done before. I went to a local big-box-bookstore and sat at a table just inside the front doors, behind neatly stacked piles of The Juliet Stories and a little poster that said, “Meet the Author!” All of this had been arranged in advance, of course, but I hadn’t really known what to expect.

In the opening moments, I had the sinking feeling that it would be humiliating in the way that certain exercises in one’s literary life can be — readings to which not very many people turn up, or readings to which many people turn up to hear the other person on the bill, leaving one sitting behind a stack of books that no one is interested in buying because they are all lining up to have the other person sign his/hers. Yes, this has happened to me. If you’re a published writer in Canada, it’s probably happened to you, too.
I’m not complaining. Like Margaret Atwood says (and I paraphrase), “Don’t whine. You chose this. Nobody made you be a writer.”
In any case, as the evening proceeded, I discovered quite a lot to enjoy. I smiled at everyone who walked through the doors, and almost everyone smiled back in a seemingly genuine way. The few who didn’t interested me too: they would pretend not to see me at all. Approximately a fifth of all customers were immediately drawn to a lamp that was also in their sightline. (I had to check it out too, finally, and it was quite pretty; but no one actually bought it.) I started to feel more comfortable in my role as “Meet the Author.” Strangers approached and bought the book. My mom arrived and bought two copies! (I was embarrassingly excited to see her, as that was early on and I was worried no one might actually approach.) Acquaintances from Twitter and Facebook dropped by too.
Almost to a person, those who came up to talk to me approached in the same way. Enter customer through front door. Smiles exchanged. Customer takes second glance at table. Customer heads off into greater store. Fifteen minutes later (or so), customer returns, pauses beside table, touches a book. I stand and ask if they’d like to know more. We chat, often at length. I sign book.
One woman had never met an author before. Several had children who were curious to know more about making books. “Do you have a really big printer at home?” One woman laughed at everything I said as if I were wonderfully witty (I’m not). The only person who approached, chatted, and didn’t buy the book was also the only man who approached (other than the fellow who thought I was a store employee and wondered where to find books on Japan). I got the biggest smiles from the men, on store entrance, but only one returned. Maybe most men don’t read fiction? Or maybe they don’t read fiction with a girl in a bathing suit on the cover?
All in all, it was a genuinely pleasant evening, and I’d sign up to do it again without hesitation.
I haven’t read from The Juliet Stories all summer. May and June were heavy with readings and appearances, and it was a relief to take a little holiday. But readings start up again in September, so it seemed wise to reacquaint myself with the words on the page — which is what I did during the slow moments yesterday evening. It reminded me why I’m doing what I’m doing.
This morning I was digging in the attic through old boxes of manuscripts, and came across early versions of The Juliet Stories. Wow. In various drafts, the titles included “American Sandinistas,” “Photograph Never Taken,” “Blackbird,” and, simply “Beautiful Book.” I remember giving that particular draft that particular title because I needed to feel hopeful about the work ahead. I needed to believe in it. I was still two years away from finding the form that The Juliet Stories would inhabit. A long haul, and yet, reading over those printed words in the store last night, it felt worth it. I’m glad that I stuck it out.
This is a very different point in the publishing process, but I need to stick it out, similarly.
I’m fairly certain that everyone who bought a book (with the exception of my mom, and one Twitter friend) wouldn’t have found The Juliet Stories otherwise. One of the great mysteries, as an Obscure CanLit Mama, is how to reach people who might like the book, but who will never hear about it. Which is, let’s be honest, the vast majority of the reading population. That’s why independent booksellers, who hand-sell the book, are so important to writers like me. That’s why friends who tell friends who might tell more friends about the book matter so much. And that’s why I’m more than willing to sit behind a table in a big-box-bookstore smiling at everyone who enters.
This is what a holiday with four kids and two dogs looks like
Summer day, blue moon