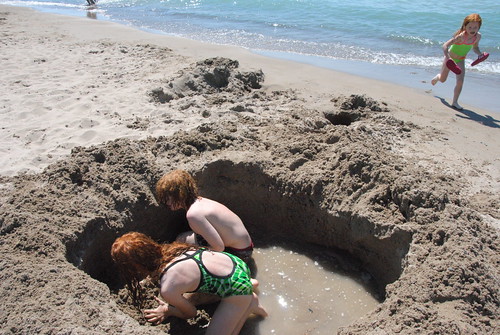 It’s too hot to blog. I’m fairly sure it’s too hot to think clearly, though that would be regrettable given that it is my primary source of income. I find my brain drifting off before reaching the end of a sentence, asking, huh? What was that?

This week I’m doing interviews with several local entrepreneurs. It’s been fascinating so far. Best of all, they work in air conditioned environments. I’m being facetious. Which is probably ill-advised. Blame the heat.

I do not work in an air conditioned environment.

Here’s a little story: on Wednesday, I took the kids to a place called Herrles, which sells local veggies and fruits and baked goods, and is slightly out of town, and therefore requires a bit of a drive. It was rush hour and took longer than usual. But was I grumpy about the situation? I was not. Because with the air conditioning blasting, we’d found ourselves a brief and happy reprieve.

Last fall, we learned that our home’s central air conditioner, which we only used in desperate situations anyway, was broken and not worth repairing. We have not replaced it. And even though I only ever used it with a great deal of guilt and angst, I miss knowing it’s there if the kids can’t sleep (or we can’t sleep).

Or maybe my brain has officially lost the will to reason.