Why I love doing research 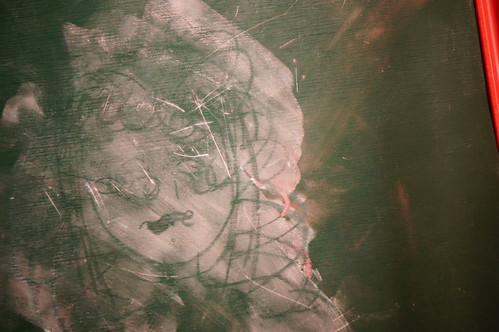 I’ve been doing research recently on the 1920s, particularly here in Canada. To that end, I pulled a few books off the library shelves purely for their photographs. I need to see something to feel like I really know it. (Even better to walk through it, smell, taste and hear it, absorb it; but I haven’t figured out how to time travel yet.)

A few days ago, I opened one of these books of photographs and thumbed through. I was looking to see what children would have worn on their feet in summertime (I’m guessing most went barefoot). And suddenly I was stopped cold and the hair on the back of my neck stood up. For real. I’d turned to a page that showed two photographs. One was of a large family posed around their car, in front of their stone farmhouse. The other was of a group of men working in front of a barn.

The caption said that George Black, of Ayr, Ontario was a farmer who welcomed technological advances. The caption went on to say that George Black had himself been an inventor who built a windmill on his barn that powered a lathe and a grain separator.

My family lived in the Black farmhouse from 1987 until 1991. The Black family had died out, and the farm had been bought by the neighbouring farmer who rented the somewhat restored farmhouse to us. We also had use of the barn and some acres surrounding the house. The house and barn were endlessly fascinating to us — filled with odd inventions, and relics from the past. We knew that the Black family name had died out with George’s children, and we knew that the house had last been occupied by two sisters who never married. We gathered clues from the things we found on the farm. My siblings and I made up a lot of things, too, for the purposes of thrilling guests. (It was a good house for ghost stories.)

But the one thing we never saw was a photograph of the family who had cleared the land and built this house and lived in it. And there they were, smiling out of an odd little book of Canadian history, published in 1988, which I just randomly happened to pull off the library shelf. The photo credit says “private collection,” so there’s no tracking it down.

I wonder. Have they come back to me for a reason?

(And I apologize: I don’t have a scanner and can’t illustrate this post with the photo; ghostly face discovered on chalkboard will have to suffice.)

Update: My dad has scanned the photos for me. Here is the family with their car, in front of their beautiful fieldstone farmhouse (which, if I recall correctly, was built in 1874). Wow. 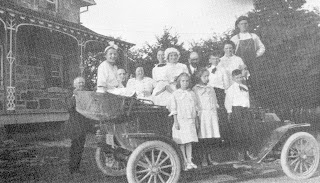