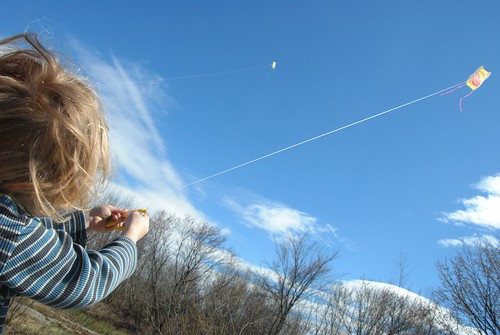 Have I been writing quite often about my dreams? Maybe it’s because I’m woken on so many mornings by my alarm, pulled out of dreamland, bringing the dreams with me. My kids are not going to remember the 2.0 version of their mother, the one who for thirty-five years or so was the very opposite of early riser. The 2.0 version thought 7 o’clock in the morning was quite viciously early enough, thank you very much. But the 2.0 version has been obsolete for over a year now. She may already have been forgotten. My kids are going to remember version 2.1, up before dawn, coming in from outside in running gear, or freshly showered after spin class. “Where were you this morning?” they ask sometimes, greeting me from their perch at the breakfast bar.

I’ll admit: it wasn’t easy to recalibrate my instincts. But I’ll admit, too: change has brought about all sorts of good things. I’m friendlier, for one thing. Less prone to the growlies. Less resentful, somehow, of the necessary morning duties, more light-hearted regarding the inevitable complaints. (“This toast is too cold!” “This porridge is too hot!”)

This morning, I woke with dreams of my friend’s father still in my mind. We attended the memorial service last night. Let me tell you about one small and extraordinary moment. After the more formal proceedings, we all went to the church basement to eat sweets, visit, and share memories. Among the people who got up to say something was a woman I’d never met. She wasn’t a family member or someone from the neighbourhood. She said she knew my friend’s father from work. She said that she worked as a teller in a bank. My friend’s father had been a customer. She spoke about his friendliness, his stories, his interest in her life, about how, as she came to know him, she would wave him over to her line. She regretted that she hadn’t gotten the chance to say goodbye. She was glad to be able to come to his memorial service. She came to his memorial service. Isn’t that amazing?

This is what it says to me: The potential for meaningful relationships is all around us.

Meaningful relationships don’t have to be conventional. They don’t necessarily require tons of time. They can be as simple as asking your bank teller a question. Being interested. Being curious. Being, most of all, present.

Today was a day rife with potential challenges. I got up early. I did not nap. I was interviewed on live radio right after the kids left for school. And then I headed off to lead writing workshops for teens. Several fairly major things remain to be checked off my to-do list. But it hasn’t been a hard day, not at all. I feel a little foot-weary from standing. I feel a little wired from more than my usual dose of caffeine. But I feel, also, the worth of every interaction, no matter how small. Pay attention. Whatever is happening in your day, look it full in the face. Ask questions. Wonder. Give it your best.

I thought, today, about how new experiences are always around us. How people, if pushed in the friendliest of ways, will embrace something new. How even the most grownup of us crave to feel those moments so common in childhood — the ones that delight and surprise us. How maybe all of us are waiting to be delighted and surprised. And then I thought, I can do that.

It’s as easy — and as crazy hard — as stepping outside of my comfort zone.