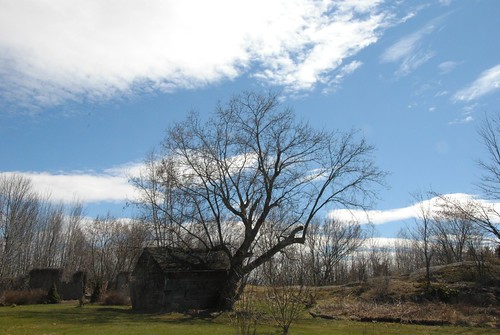 When we were driving home from Kingston, post-Easter holidaying at the farm, I was filled with ideas. Future plans. Things I want to do someday. Big things. Let me get them down on the page. (And maybe you’d like to share your big plans in the comments below; I’d love to hear them.)

** Bike trip through Ireland (or another beautiful place). With the whole family, if possible.

** Own a horse. Actually, own two horses, so AppleApple and I can go riding together.

** Write and record an album of songs. (This would require devoting several hours a day to singing and playing.)

** Spend a year training five or six hours a day and run an ultramarathon (like the Canadian Death Race, even though that’s a terrible title for a race).

** Tear down our garage and build a small apartment that could house university-aged children.

** Share a getaway in the country with friends, for retreats, summer holidays, etc.

But upon reflection, this morning, I see that I’ve already accomplished some of the big things I once dreamed of doing, and I want to recognize that too. I wanted to be a mother, and I have children. From a very young age, I intended to be a writer, and I’ve published two books. As a child, I dreamed of being a runner, and now I’ve completed a marathon. As an adult, I was troubled by the fact that I’d never learned how to swim, and I’ve learned. Once upon a time, all of the above were just hopes and imaginings and dreams. I’ve been so fortunate.

Last night I went to a kundalini yoga class. It’s been about a year since I last took kundalini. The experience felt different this time around. In the interim, I’ve pushed my body further than it had ever gone before. But I also learned that my body could be pushed too far, and injured, and that’s changed how I think about effort and pain. I felt so attuned to my own body, last night. It was easy to listen to it, and hear what it was saying — to recognize the difference between the agony of effort and the pain of gone-too-far. I felt more cautious, and yet also more available, more open to the movements, like I could flip a switch and go there. I felt a deep trust — of myself. But here’s the thing. The sense of wonder and discovery is not the same. I’ve learned my body is capable of accomplishing very difficult tasks. I’ve learned that I am strong. When I first started kundalini, now a few years ago, I was utterly amazed, blown away by what my body could do. I had no idea.

That takes away some of the sheen of adventure and discovery. But it also means there is room for a richer, more layered experience. It’s like having the second child. You’re simultaneously more relaxed, more laid-back, and not as blown away by the newness of discovering what it means to be a parent. It’s familiar, it’s known territory.

I think life should have a balance of known and unknown experiences. I’m not sure we get to choose these experiences, at least not all of the time. But I like thinking about what I would choose, if I could. And what I’ve chosen. And how I’m working out that balance in my life right now.

Can I tell you something? I really really really want to write a book in this blog-voice. Not a book based on the blog. But a book that would capture the yearning, reflection, wondering, and experimenting that I feel this blog is really about. Put that on the first list. I have no idea how it would be shaped. But I’m opening my mind to the possibility.

The many stages of reading
Things I am not doing today