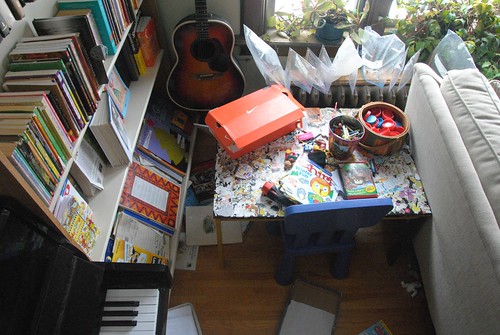 Keeping up with basic chores is pretty much overwhelming me. I’ll admit it. I read in a Macleans article that a family needs two full days/week of domestic labour in order to keep the household running. With me working more, we’re not even coming close. The house is in a constant state of crumb & clutter disarray. So I’ve been trying to use at least a few hours every weekend to tackle some corner or manageable project. Last Sunday it was: everyone gets fresh bedding! (With five beds, three of them upper bunks, that is no pleasant undertaking.) Today it was: haul the vacuum upstairs!

We’re reasonably good at crisis cleaning, as in: someone’s coming over so let’s take the vacuum for a spin around the kitchen/dining-room/living-room, and forget the rest of the place because no one’s going to see it anyway. It may have been months since our upstairs had been visited by the vacuum. And of course in order to vacuum, first I had to pick all the crap up off the floor and put it somewhere, preferably where it belonged.

I realize this should have been a job assigned to my children. Their rooms were the problem. I know that. And they’ve “tidied” occasionally. A superficial tidy occurred last weekend in advance of their grandmother coming to stay. But today they were all off to friends’ houses. And it just needed to get done. So I did it. And here’s what I found: Little kids’ room: passable, and every toy has a place. Albus’s room: easy, mostly Lego and books on the floor. AppleApple’s room: UNMITIGATED DISASTER ZONE.

Not surprisingly, my most creative child has the most unbelievably messy room. I mean, honestly, there were pins, staples, hair bands, beads, fabric, ribbons, scissors, cardboard, cut paper, thread, Lego, paper scraps filled with tiny handwriting, glass bottles filled with unidentifiable liquids, and on and on and on. It was like a window into her wild mind. For example, I give you “FroggieWorld,” which looks to the uneducated eye to be a shelf cluttered with cardboard tubing, string and cloth swinging from chopsticks, scraps taped together, and vessels filled with water and rocks: a complete mess, right? I chose not to touch it. It was contained on a shelf, and besides, I knew it to be FroggieWorld because she’d given me the tour. She’s devoted many happy hours to its creation.

I devoted a rather unhappy hour to clearing her floor from end to end, before vacuuming could begin. And I love her to bits. But I’m wondering, will she ever be able to organize herself? How much of what we accomplish happens because we’re able to stay on task, to prioritize, to keep what we’re working on boxed into separate tidy containers — literally and figuratively? It got me wondering, again, how organized I really am. And how much more organized I need to be in order to compartmentalize different aspects of my writing work into different sections of the work day, so that I can, say, answer emails here, write blogs here, process photos here, and write books here. What to do with a head full of “good” ideas? How to pin down the ones that can realistically be pursued and completed? How to stay on track? How to make FroggieWorld, and sew Sock Puppies, and keep a regular journal, and a story-writing journal, and invent a Harry Potter game, and take notes on ancient Athenians, and read French books, and and and … voila, messy room! My version includes: The Big Fat Juicy Belly Worm; photo projects; Obscure CanLit Mama; recording more Juliet songs; an idea for a novel titled The Runner; an idea for another novel told from the viewpoint to four different characters; an idea for yet another novel about a spy … and, and, and … voila, messy room.

Lingering in between
A few small good things