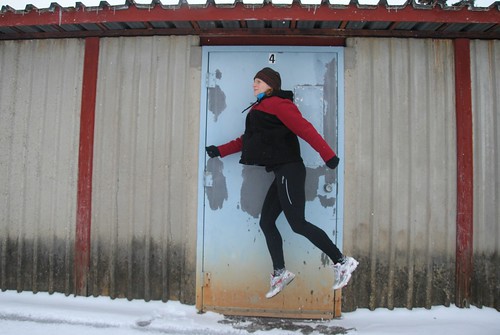 Every Monday morning my alarm goes just after 5am and I wonder, why am I doing this? Less than two hours later, I’m showering after a good swim and the answer is loud and clear, because it makes me feel terrific. And just like that the new week begins with good energy and a sense of momentum.

This winter, I’ve really pushed the early morning exercise, aiming to rise early at least four mornings a week. Last week it was five. Surprisingly it was not that difficult, though it did result in an unplanned crashed-out nap on the counch at 7:30 on Friday evening. Still. Worth it? Yes.

I took this photo on Sunday afternoon following my second post-injury run: sixteen short minutes of snowy bliss. I felt just like this: like I was flying, like my feet weren’t even on the ground. Monday morning, after the swim, I went for my first physio appointment and the news was good: dedicated strength work should balance out my muscles and make me faster and stronger in the long run (pun intended). I’ve been feeling rather down on myself, questioning whether I’m too old, whether my quest to become fitter and faster has hurt rather than helped me. But that wasn’t the physio’s take. She sees me as an athlete who needs to focus and hone my training in order to support the good things I’m doing for/with my body. It isn’t silly to dream of getting faster. It’s a perfectly natural goal, and achievable too.

The week in suppers: family time
Things I am glad for this morning