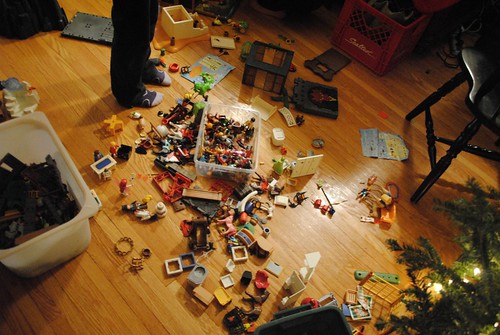 I spent an afternoon earlier this week attempting to sort through our six bins of Playmobil and reassemble castles and families and scenes. There’s a reason I titled this post “Mission Impossible.” I wasn’t doing it because I’m short of projects, of course; I was doing it because CJ was home sick and desperate for someone to play with. So we dragged out the Playmobil. All of it. If you’d been listening in, this is how our “playtime” would have sounded: “Stop sorting, Mommy! Make your guy talk to my guy!” And then I’d make my guy say, “Let’s find my missing candelabra base. We can go on a deep sea mission to the bottom of this bin and ….” Deep sigh from CJ.

I’ve said it before and I’ll say it again: I’m not good with the playing.

My proudest accomplishment of the afternoon was the completion of one room in a princess castle. One room. It is now on a high shelf and everyone who looks at it has to sing “Aaaaaaaah” in an angelic tone while gazing appreciatively. Or maybe that’s just me. In any case, no one is allowed to touch it. Oh wait. Isn’t that the whole point? Of having TOYS? Maybe Albus was on to something when he came into the living-room later that evening and began vrooming the newly restored Playmobil car (with doctor and doctor’s teeny-tiny kit that includes a teeny-tiny flu shot needle) through my carefully sorted piles. Let’s just say the doctor might be in the wrong profession. She should have been a smash-em-up-derby racer with jet-pack engines and maybe a flame-thrower or two. Can you hear the heart-breaking sound of plastic items being explosively scattered across a wooden floor? I’m sure it was fun on the pure level of play, but I become momentarily deeply discouraged. My carefully sorted piles! Tossed asunder!

There’s a lesson in here somewhere, if I care to extract it. But is that the kind of day it is? A day for lessons? No, today, I’d rather skip the moral of the story, down my cup of coffee, gird my loins, and head out into the horror that is the streets of uptown: thick with people driving their cars around and around as they seek for a parking spot and grow increasingly grim and hopeless (and mentally act out the Playmobil doctor’s wreckless acts of destruction). Merry Christmas! I’m going to walk instead. But wow. I need some girding, some serious girding. I’m in the homestretch of preparations. I can do this! I can find and assemble every piece of this Playmobil holiday!

Wait, what were we talking about?