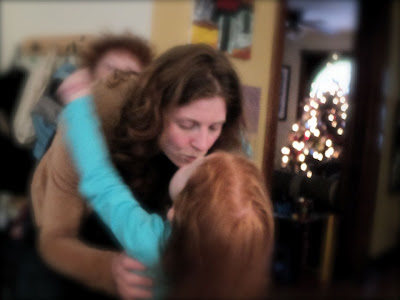 It is raining when it should be snowing this morning. I am wearing pajamas and listening to Christmas carols being played on the piano. That probably sounds more romantic than it actually is. Life often does in Blogland. But that’s another topic for another post.

Yesterday’s going to take some recovery time. But I don’t mind. Welcome to our recovery Sunday.

Yesterday was a long and well-coordinated day right up until our youngest daughter had a nosebleed while we were out at a restaurant. Suddenly it got a whole lot longer and slightly less coordinated. On the way to the hospital, Kevin reminded me to drive safely and I assured him it was fine because “I always tail-gate slow drivers.” (I was ever so slightly resenting how calm he remained — not that that’s a bad thing in such situations, but I kind of wished I weren’t the only one freaking out, if you know what I mean. It would have made me feel less like I was freaking out.) The good news is that her nose bleed had stopped by the time we got to emerg, and lest you think we’re alarmist parents, we sat at the pho restaurant for about 15 minutes waiting for it to slow, which seemed negligent, until the nurse at the hospital told me we could have waiting 45 minutes. Did you know that?? I mean, the nose was pouring. I hope you’re not eating. Luckily both grandmas were with us at the restaurant so Kev and I were able to depart quickly and together and know the other kids would be fed, and that the performer would get to her performance. Because yesterday was AppleApple’s Singer’s Theatre show. I’m sad to say her dad missed it altogether due to the medical crisis. I’d gotten to see the afternoon show, and it was so good. Those sweet sweet children. And my dancing daughter in her soccer head band. She’d come to the show straight from soccer (grilled cheese sandwiches eaten in the car on the way to the curtain call) and the head band stayed on. She was the only child on stage who looked like no one had bothered to brush her hair. No one had. It was beautifully brushed for the evening performance, which Kevin and I both missed, but thanks to quick planning and cellphones, both grandmas were able to attend.

And after all that, after a day that included a visit from the washer repairman, and two birthday parties, and bowling with Grandma Alice, and taking a cab (due to having only one vehicle), and two soccer games, and carpooling, and two performances, and a spot of Christmas shopping, and supper out, AND a trip to emerg, Kevin and I made it at last to the first holiday party of the year. Thank God for Grandmas. We were able to stay out as late as we wanted. And so we did. Ergo, today’s slow recovery.

I wore red high heels, borrowed from my sister Edna (come to think of it, she might not know I borrowed them from her … uh, thanks, Ed!).

There was a lot of dancing. It’s really the point of the party, which has become an annual tradition. This might be the fourth year we’ve gone …??? And every year it seems impossible that another year has passed and we’re back in this house crowded with friends, getting down. It’s kind of a good marker, the way birthdays are. You can remember yourself from year to year, note the changes. The first year we went I was nursing an eight-month-old. I was timid on the dance floor. Clearly timidity was a passing phase.

Not to get too philosophical, but dancing, oh, so good for the soul and the body. Every once in awhile you hit the perfect song, the perfect rhythm, there’s a mindless and perfect connection to the beat, and you’re just lost to the world. It’s a gift when it happens. If you feel like dancing, try this. And happy kick-off to the holidays, everyone.

Advent: celebration and anticipation and hot chocolate for breakfast
The week in suppers