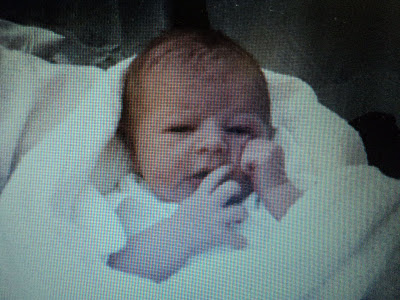 Well, that’s me. On my original birthday. It’s been awhile since I looked like that. Soon after this photo was taken I developed a wicked red rash and all photos for the next few months (and there were plenty; I was the first child) show the homeliest infant you can imagine, though I did exude a lot of personality. I was not an easy baby: a screamer with stamina. In one of my favourite baby photos, I’m standing stiff-legged in the palm of my dad’s hand, probably about six months old. Strong and determined. And grinning ear-to-ear.

I haven’t had the chance to blog over the holidays, which is a good indication of an excellent holiday, and a busy one. The photos posted yesterday equal the sum total of decent photos I took this Christmas season. (With the exception of some adorable captures of my beautiful nephew, but I didn’t want to confuse you by including him in my wordless album post–Hey, Carrie’s got an extra kid, when did that happen?) I didn’t take many photos, truth to be told. This year, I felt pulled to participate in the moments rather than record them.

My birthday falls at the perfect time for annual summations and dreaming ahead. On the night before my birthday, for the past number of years, I’ve stayed awake until midnight, and written something in my journal about the year past and my hopes for the one to come. Since I rarely write anything by hand anymore (and thank heavens for that–my printing is virtually illegible, even to me), the journal contains a series of snapshots, which I re-read every December 28th with a mixture of sadness and appreciation. It gives me a sense of movement and change. I catch glimpses of the groundwork being laid that allowed for major life shifts in attitude. Change is slow. And you never know what will actually change when you choose to do something different, or try something new, or leave something behind. Change is rarely predictable. We go where we’re going, not necessarily where we point ourselves.

But it’s helpful to point ourselves too–beyond helpful, actually. It’s critical to be alert and reflective and not to avoid recognizing the things that hurt. I would never speak against plotting and planning and organizing and trying your best. Just leave plenty of room for free-form leaps in your carefully laid plains. Leave space for rest and enjoyment. Be kind–to yourself and to everyone around you. That’s perhaps the biggest lesson I’ve learned over the years. And the best advice of all is To thy own self be true.

Christmas album
The worst/best time to have a birthday