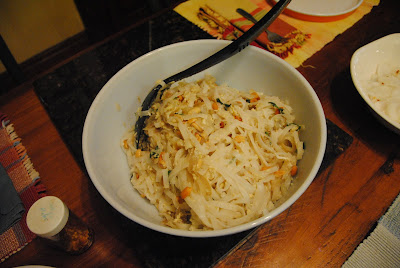 **Monday’s menu: Pad thai (pictured above). Broiled shrimp and tofu. Daikon salad. Stir-fried rainbow chard.
**Original plan: Pad thai with hot and sour soup. But both things require tons of pre-prep organizing and stirring up multiple bowls of things, so I decided to simplify.
**In the kitchen: Whipped up after school. The pad thai is a version without ketchup; it’s made with fish sauce and lemon juice and piles of cilantro (not vegetarian, no).
**The reviews: Eaten too hurriedly for reviews, but everyone seemed happy.
**The verdict: Excellent.
**Bonus recipe: Radish salad was made by slicing the daikon super-thin, then mixing up a dressing of fresh lime juice and maple syrup, plus salt. Sprinkle on some hot pepper flakes. Divine. (My invention).

**Tuesday’s menu: Honey-baked lentils. Steamed rice.
**Original plan: Yup. This one was by request. It needs a vegetable, I know. I’m not awake enough to think of one.
**In the kitchen: Easy work, completed after waking from a killer morning nap, following my night of doula’ing in Toronto. Turn oven off, leave until suppertime. Eaten post-swim lessons.
**The reviews: I didn’t get to hear the full reviews, due to racing off to a soccer coaching clinic with AppleApple. She ate a sandwich instead. But when we left, CJ was in the throes of an impressive tantrum because he couldn’t SEE the honey in the lentils. A reliable source tells me he became so incensed that he bit the table, at which point everyone started laughing, even him. But he didn’t eat the lentils. Everyone else did, however, and within 24 hours, it was gone.
**The verdict: Good meal to make in advance. And yum.

**Wednesday’s menu: Leek and potato soup (crockpot). Bread, hard-boiled eggs, cheese, sliced tomatoes.
**In the kitchen: Early morning chopping and sauteeing, but it paid off. I pureed it in the pot, and called it “Mashed Potato Soup.” (Ever-popular.)
**The reviews: “It looks different, but it tastes the same. Like, no offense, Mom, but when I saw you with that big bowl of vegetables this morning …” -Albus (I did use lots of leeks; and the soup had a greenish yellow tinge that was slightly unappetizing, or, in Albus’s words, “kind of looks like barf.”) Unfortunately for us, right about then, CJ gagged on his egg yolk and threw up an entire egg right onto his plate. I would characterize the moment as matter-of-fact rather than dramatic. Thus endeth supper. You’re all racing to make leek and potato soup right now, I can tell. I was solo parenting because Kevin was in Toronto.
**The verdict: Actually a really good meal, both food and chat.

**Thursday’s menu: Curried lentil soup (crockpot). Saag paneer. Baked brown rice. Plus leftover white rice.
**Original plan: For some reason, when I made the menus on Sunday evening, I was hankering for risotto and had written that down in place of regular rice. Who has time to stir the risotto? Not I, at least, not yesterday. So I threw a lentil soup in the crockpot and made brown rice instead.
**In the kitchen: Was chopping onions for soup when the electrician knocked on the door to go over the outlets and light fixtures and other things requiring thought and decision-making; but that wasn’t all. The kids were finishing breakfast and getting packed for school. Kevin was in Toronto (yes, again). Another parent was telephoning to tell me about a last-minute change to school-walking plans. Albus was refusing to walk his little sister. “Where is the electrical box, can you show me?” “You’re so mean! I never get a chance to talk to my friends! And now you’re going to make me walk her!” Chop, chop, chop onions. The thought crossed my mind: I can’t hold this together. But then I did. On with the day.
**The reviews: Most chose the brown rice and we talked about how nutritious it is. Does it taste different from white rice? We debated. Fooey gobbled the spinach and paneer and requested leftovers for her lunch box. Lentil soup was eaten. It was just me and the kids, and we enjoyed each other’s company. And they all ate lentils and brown rice and, at the very least, sampled spinach and paneer! An I-love-these-kids moment.
**The verdict: Good food.

**Friday’s menu: Bailey’s pickup supper. Plus picnic for soccer girl. Plus dinner out with girlfriends for me.
**In the kitchen: Managed pickup and food storing in under an hour. Additionally, packed picnic, soccer bag, running gear, and ran out the door to pick up a car from the Grand River Carshare, which we just joined earlier in the week, in order to meet Kevin and kids at skating.
**The reviews: I wasn’t home to hear those reviews, but AppleApple and I enjoyed the picnic (apples, red peppers, cheese, bread sticks and pretzels, and a pumpkin muffin) after she’d changed into her goalie gear, and I’d changed into my running gear. Then she went to her goalie clinic, and I went for a run. An hour and a half later, we zipped down to another indoor field for AppleApple’s second soccer session of the evening. I’d arranged carpooling for her, so I dropped off the Co-op car and walked to meet my friends for dinner and a drink. (Kevin was at his own soccer game; Albus was at a sleepover; and the others were home with a sitter.)
**The verdict: All I can say is PHEW. We made it all happen. This scheduling stuff gets easier with time and experience.

Weekend kitchen accomplishments: Four loaves of bread. Double-batch of waffles (three bags frozen for later). Pan of roasted tomatoes turned into sauce. Two jars of applesauce made from apples picked at Kevin’s family’s farm. Banana bran muffins.
Note: All of this accomplished on Thanksgiving Monday. We spent the weekend with Kevin’s family. Good grief but it’s a hot day to have the oven on. I can’t believe I’m saying that about October 10th.

Happy Thanksgiving!
We are thankful for ...