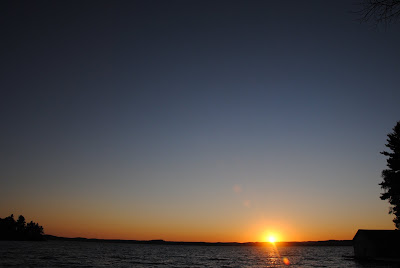 Yesterday morning, I carried my three-year-old to nursery school, nearly one kilometre away, in the rain. Why? Well, he wasn’t in a walking mood, that’s why he was on my back. But the reason I was walking was bare bones basic: I didn’t have a car at my disposal; Kevin had an early appointment to which he needed to drive. About six months ago, as part of our family’s Green Dream plan, we downsized to one vehicle. Are we a greener family than before? Yes, mostly because having fewer options forces us to make different choices.

Such as carrying a kid on my back in the rain to nursery school.

Listen, if I could have driven, I would have. I’d been up early swimming, I’d gotten four kids fed and organized and three of them out the door. That left one little guy, and he couldn’t get to school by himself. I wanted my quick restorative morning nap. It was too wet to fire up the bike stroller. If there had been a vehicle in the driveway, would I have chosen to walk? Not a chance. So the omission of the vehicle itself is feeding into the success of our Green Dreams. It’s so easy to take the easy route when it’s easily available.

Sometimes, I’m grumpy about it. If you see a bedraggled woman, surrounded by a pile of kids in raincoats, shaking her fist at you as you drive by, think of me. In fact, hey, that is me! And yes, I just cursed you and your car for blocking my family’s passage across the street. Or maybe just for being inside a warm dry moving vehicle. Sorry. It’s wet out here. And we’re moving so slowly.

I am not a naturally patient person, but do subscribe to the notion that by walking (or biking) rather than whisking along inside the sealed world of the car, I am experiencing life differently. Out here, I know the weather. I know the seasons. I know the geography. Plus, I have to leave on time, or I’ll definitely be late. There is no such thing as breaking the speed limit when walking with four children.

But here’s my confession: you’ll still see me in a car pretty frequently these days (maybe that was you shaking your fist at me.) We do have ONE after all and I can’t imagine life without it. Well, I can, but life would include a whole lot less soccer. There are no direct bus lines to either of the two sports facilities that draw members of our family upwards of nine times a week. One is 5.5km away, the other is 9km. In other words, not terribly far, and probably biking distance (though not for short legs on tiny bicycles); but in addition to there being no direct bus routes, there is also no safe bike path to either place (not to mention, as the season changes, we’d be biking after dark.)

It’s one thing to complain about this, but another to ask: Would we choose to bike or ride public transit if it were an option? And truthfully, I think we would not. Not unless we had to. Because we’re usually in a hurry. We’re dropping one kid here, and racing to get another there. We’re cutting corners, juggling schedules, trying to cheat time. Having a car allows us to schedule our lives in a way that cannot be transposed into a car-free life.

So, I’m resigned to carrying some Green Guilt. In fact, our family’s increasingly busy sports schedule also means we consume more water than we used to. I’m telling you. The laundry. Wash those socks as quickly as possible! I hang everything to dry, with the exception of giant loads of towels, which tend to go in the drier. But still. Green, it ain’t.

Maybe it was the Green Guilt over the car and the sports that led me to introduce our latest experiment: we’ve gone vegetarian at home. We are neither buying nor cooking meat (with the exception of seafood, on occasion). The kids are missing ham on their sandwiches, and I am constantly brainstorming ways to get more protein into all of us (like starting the day with eggs for breakfast). And if a grandparent invites us for a meal that includes meat, we’re happy to eat it up. But at home, we’re meat-free. It’s been about a month, and I’m sticking to it, despite the odd complaint, because a meatless diet is one sure-fire way to shrink a family’s ecological footprint. And we’ve got such a big (sweaty) one. We’ve got to try.

Even if it means grumpy walks in the rain. And children fantasizing about summer sausage.

Last week in suppers; think autumn vegetables
What I found this morning when I went looking for something else