When you try, but you don’t succeed, what then? 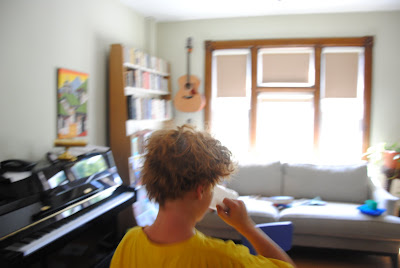 This morning, after breakfast, Albus practiced piano. He always checks with me before getting a sticker, to make sure he’s earned it. Which is awfully sweet. He’s a good kid. Except this morning I really didn’t think he’d earned it. He kept rushing the half-note, always the same mistake in the same place. So I asked him to play the song again, with that in mind. I suggested playing the difficult spot several times over, with the correct notes and timing. But all he wanted was to hack his way through the song and be done with it, regardless of notes and timing.

Then we looked over his dictee results. In French, his teacher had written: “You need to study.” Things is, he’d studied. A fair bit. He’d sat down several evenings last week and worked on his homework, including studying for this dictee. He’d shown me his worksheet. I knew it was true. But the proof wasn’t there in the final test results.

As we were having this conversation, and I was offering more advice re efficient piano practice, Fooey happened by with a question. Albus was extremely rude to her. I reprimanded him. He pushed her. ie. things went from bad to worse, and quickly. I sent him upstairs on a time-out.

Why does he need to act like this? the thought half formed as I raced around the kitchen and cleared the breakfast dishes and wrote a cheque for AppleApple’s sub order and helped Fooey ready her bag for school and tried to remember all the details that needed to get done in the next eight minutes before everyone would leave and the house would go suddenly quiet, and I would eat breakfast and pour a cup of coffee and greet this computer.

Why is he so angry?

I called him downstairs, and I said the above, an abbreviated version. He was quiet. Is that kind of how you feel? I asked, and he nodded.

I’m not sure how to make life better for him. Or easier. (Why do parents so often want to make life easier for their kids? But I do. Or not easier, exactly, just gentler.) What is the lesson, if hard work does not pay off in success? You know, it doesn’t always. Some people have to work much harder than others to achieve the very same level of success. I don’t want him to get frustrated, to give up, to not care.

I do want him to take responsibility for the choices he makes. I don’t particularly want to lower the bar.

But what if he’s trying, and it’s not working? Is the answer always: work harder? I’d feel frustrated, too.

The Week in Suppers: Reprised
Merci beaucoup, mes amis blogistes (totally made that last word up)