The Week in Suppers: late-September 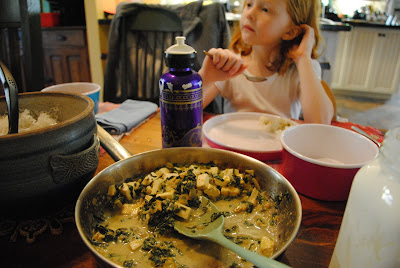 MONDAY’S MENU. Lentil/flax pasta. Roasted tomato sauce. Green salad. Broiled tofu and eggplant.
THE RATIONALE. Quick. AppleApple and somewhat picky friend rushing out the door by 5pm to their first theatre rehearsal. Preferably with food in tummies.
THE COOKING. Sauce made on Sunday, warmed up from a jar, deliciously easy. Note to self: start boiling pasta water earlier on theatre nights.
THE REVIEWS. “I don’t like sauce.” “Would you eat a carrot if I peeled one for you?” “No … but my mom would make me eat it.”
THE VERDICT. Nobody noticed the pasta was made of lentils and flax.

TUESDAY’S MENU. Lentil soup (harira) in crockpot. Saag paneer. Basmati rice.
THE RATIONALE. Bought paneer on a whim + tons of fresh spinach. Harira flavours similar to dahl, easy to make. Voila: an Indian feast.
THE COOKING. Looked up recipe for saag paneer online, all recipes too complicated, invented my own version that did not involve whirling spinach and spices in food processor. Note to self: cinnamon, cardoman, garam masala, cumin and coriander.
THE REVIEWS. “Mom, will you make this again soon?”: Fooey. I kid you not. Fooey! I was just starting to worry that the child would grow up without ever willingly eating a cooked vegetable, when along comes a pan of spinach and paneer (Indian cheese; it looks a lot like tofu, which she loves). My version included cayenne pepper. She had four helpings over rice.
THE VERDICT. Thrilled mother. Relatively happy family (not everyone loved the spinach, I should add). But lentil soup is liked by all.

WEDNESDAY’S MENU. Beet borsch in the crockpot. Buns and cheese. Coleslaw.
THE RATIONALE. A request from AppleApple. This cook loves requests! Especially those involving bright purple vegetables.
THE COOKING. Lots of chopping, but accomplished before breakfast thanks to the crockpot. Coleslaw whipped up last-minute with an improvised mayo-based dressing. With white sugar.
THE REVIEWS. “I’m not going to try that even if you put it in my bowl.”: Fooey. Ah, back to the norm.
THE VERDICT. Delicious. Sorry, Fooey. You’ll just have to grow to appreciate cabbage and beets.

THURSDAY’S MENU. Veggie dogs, hots dogs, and hamburgers. Potato chips. Leftover borsch.
THE RATIONALE. Meet-the-teacher night. Barbeque fundraiser.
THE COOKING. Heated up the borsch upon returning home around 7pm and feeling under-nourished.
THE REVIEWS. “More juice!”
THE VERDICT. Could have been worse. At least I didn’t have to cook; instead, took the opportunity to nap on the couch around 4:30, with the kids reading and practicing piano around me. That was lovely.

FRIDAY’S MENU. Bailey’s pick-up supper: baguette, soft pretzels, cheese sticks, cheese, tomato and red pepper slices, pickles, brussel sprouts with pecans, melon and purple grapes.
THE RATIONALE. On Friday’s, from May until October, I pick up a wagon-load of local food from Bailey’s.
THE COOKING. Sauteed brussel sprouts in butter. This dish is only eaten by me and Kevin. It is divine.
THE REVIEWS. Happy conversation around the table. Contentment.
THE VERDICT. What could be better?

Best intentions, the weekend edition
Seized by the day