On goals, swimming, and going for the easy points 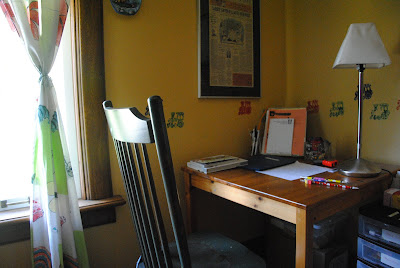 Today is Thursday. I set my alarm for stupid-early and dragged myself scarcely-awake to the pool to meet my friend. She couldn’t make it tomorrow, and I knew I wouldn’t make it without her. And we swam. It was lovely. I thought about next to nothing. That was lovely, too. When I got home, AppleApple had her packed schoolbag waiting by the door, and was at the counter, dressed and eating breakfast. Apparently, she is taking “be more organized” to heart. On Thursdays this year, she is attending a different school, and a bus picks her up relatively early.

My goals for AppleApple are that she learn how to organize herself and her belongings, and that she finish the projects she starts. I was required to articulate these goals for her enrichment program, and I shared them with her. I suggested she come up with some goals of her own, but she seemed content with mine. This was at supper last night. Albus recalled that he’d been asked to set goals at the beginning of the school year (ie. less than three weeks ago), but he couldn’t remember what they were. So I set a few for him, too. This is what we call “family meetings,” now. Basically, it’s supper-table talk. Sometimes I announce: “We have to talk about something important,” and everyone pays extra attention.

My goals for Albus were to pay attention to details, and not give up.

He didn’t appear to be paying attention when I told him.

But he did go upstairs after supper to finish his math homework (in our newly tidy workspace: photo evidence above); and he did pass his piano songs; and he did write out his dictee three times (which is his study method).

He wasn’t keen to try my alternate study method this morning: a quiz. But he managed about fifteen minutes of work at the chalkboard before he lost steam and became frustrated. Kevin and I played good cop/bad cop. We got through 35% of the material (he has to study full sentences for the dictee). It was clear the rest of the material needed the same attention, but he didn’t want to keep going. Kevin hugged him and told him he was proud of the work he’d done. I suggested we spread out the studying over many days, breaking it down into, say, one sentence per day. Like piano practice: he doesn’t try to squeeze a week’s worth of piano practice into one day.

He was skeptical and thought he’d likely forget from one day to the next; but he agreed that if these test results weren’t great, he would try studying differently. Here’s the thing: he doesn’t lose so many points on really dreadful spelling (except for the occasional tough word). He loses points on the details. Not capitalizing names, and words at the beginning of sentences. No punctuation marks. Random accents. Knowing a word is plural but neglecting to add the “s” at the end. “Those are only worth half a point,” he argued. “It’s an easy point to get,” said his dad. “You should get all the easy points you can.”

Hm. Didn’t mean to write about studying, AGAIN. But there it is. That was our Thursday morning. Kevin and CJ left for their walk to nursery school. Fooey and I waved goodbye to Albus, and we walked down the street to meet her friends who walk her to school on Thursdays, when AppleApple is at enrichment. I love that AppleApple gets this special program designed especially for her, and she’s earned the chance to spend a day a week exploring and being challenged and having fun … but I mourn, a bit, that Albus doesn’t. I think he needs it more; she’s the kind of kid who designs her own special programming all the time. Fooey, too. She comes home from school and gets a blank piece of paper and she writes and writes: “Writing workshop!” she calls it.

So we have to work on our own special programming.

One fine discovery we’ve made this fall: Albus loves to swim. So does AppleApple. Kevin has now taken them five times for lane swims at 7 o’clock in the morning. It is slightly eccentric (I’ve never seen another kid at early-morning-lane swim, except for the swim club kids), but it’s working. AppleApple likes to do sprints. But Albus just likes to swim. He swam 26 laps without stopping yesterday morning–and I mean really without stopping. He reported that he had to swim with one eye shut because his goggles had slipped and were leaking and he didn’t want to stop to adjust them.

Kevin and I just look at each other and go: WHY IS THIS WORKING?? Could we have the magic formula, please?

Why is he willing to patiently swim laps, unperturbed when his sister splashes past? What did we do right in this situation? All I can think is that first we had to teach him to swim, which took years of lessons and many complaints along the way. And then we had to take him to the pool. And then … well, then we just let him swim how he wanted to swim. And it turns out he wants to swim back and forth, not very fast, for as long as he possibly can.