And it all begins again, afresh, anew 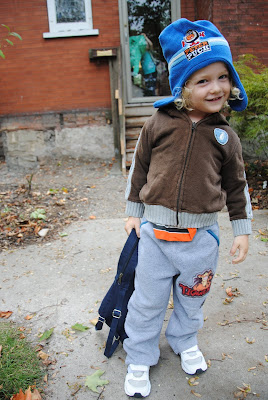 He left first, for nursery school, walking with his dad. He has no need for a backpack, but everyone else has one, so he insisted. The temperature has dropped and we had to dash to the attic to dig for winter hats and fall jackets. The report from Dad was good: they enjoyed a “Star Wars” themed walk to nursery school and parted without tears. I will pick him up in two hours. Repeat every weekday. Our new fall schedule. 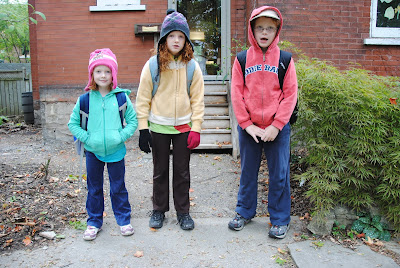 After I said goodbye to CJ, the big kids emerged for their annual back-to-school portrait. This was the best they could muster. And yet, they’re all reasonably excited about returning to school. No, really, they are. 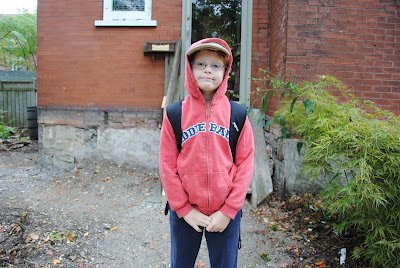 It was just as I’d imagined. We always pose the back-to-school pictures on the porch. This year we have no porch (they’re scheduled to start rebuilding in a couple of weeks; please let it be so). And there’s something, um, dismal about the background. Albus doesn’t look so happy either. But he departed at 8:30 sharp in grand spirits, off to walk to school with his friends, all of whom will be in his class this year. 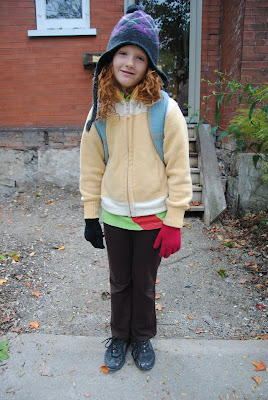 Nothing dismal about AppleApple’s chosen ensemble, despite the brown pants and black shoes; she’s even wearing electric blue socks. On the walk to school, she was extremely focused on getting there, and when we reached the grounds, she ran off without a backward glance, or even the semblance of goodbye. She’s proud to be the first child in our family to be in a portable (and it’s the new portable, which makes me think, off-gassing?). 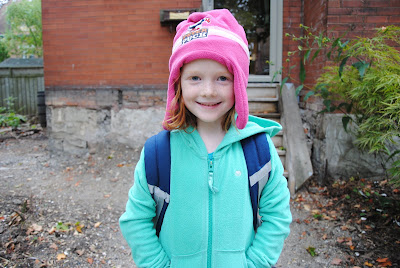 Look at this glowing child. She’d glow anywhere, in any scene, against any setting. I’m a convert to the background, in this photo. She was so terrifically excited to be starting grade one; though “excited” isn’t quite the right word, because it doesn’t capture her confidence and pride about the big step to full-day, and French immersion, and being with the big kids — being “a big kid.”

Never have we all been so ready so early. Which meant a good deal of hanging around and waiting around on the grass. Finally, the teacher called for her students to line up, and Fooey clung to my hand — I was surprised. One last kiss goodbye, and she let go, and the kids slowly made their way through the doors, and off to their waiting classroom.

(And I walked briskly home and entered a quiet house. Space to think. Silence. Cup of cooling coffee on the countertop. This feels good).

Yard sale bargains
The things that went wrong, despite all good intentions and much preparation