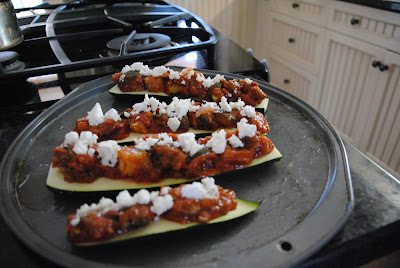 I bought a half-bushel of zucchini from Bailey’s Local Foods. I happen to love zucchini, though apparently I’m alone, in the family, in this regard, though everyone else will eat it disguised in muffins and zucchini bread without objection. (Odd side note: Kevin can’t tell cucumbers from zucchinis; he really can’t, on visual inspection. Neither can several of his children. This has made for some sandwich-related disappointment over the years).

All of which is to say that the zucchini bruschetta, pictured above, was enjoyed only by me. But let me tell you, it’s such an excellent lunch.

To make it yourself: Slice one or two zucchinis length-wise into two to four pieces, and brush lightly with olive oil (sprinkle of salt optional). On a tray, bake or broil the slices for a few minutes, until somewhat softened. Remove from oven and top with red sauce (in the photo above, that’s actually a leftover sauce made with chopped zucchini and eggplant, so basically I was eating zucchini garnished with zucchini). Sprinkle on some feta. Broil on high until bubbly.

Eat. Feed to children at your own risk.

Inviting the neighbourhood into my messy house
Tree Stump Playground