The end of a long day

I really should not be blogging right now. I should be in bed. But we arrived home late this afternoon, after a week’s holiday, and I want to write. Need to write. There are many things on my mind, but I haven’t got the capacity to synthesize them all, just now, even if they belonged together, which I suspect they do not.

So here they are, in no particular order. 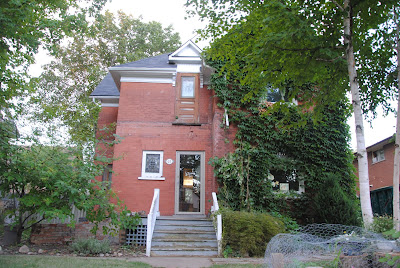 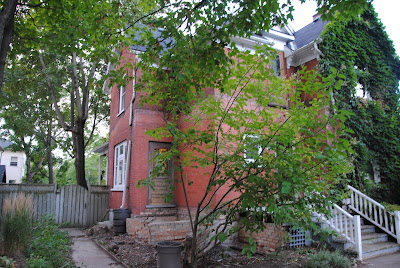 We uglified the backyard, but it’s nothing compared to what happened to the front today: our falling-down porch got ripped off, with a little bit left, stairs and such, so we can get to the door. As we drove up to the house, I got a glance, no more, and I just felt sick. The house looked so strange, so faceless. I couldn’t take another look. But after a few hours, and before it got dark, I went out on my own with my camera and it looked … okay, really. I could imagine what would be there in the future. Even a little office for me, out that side door.

So, we just went a week without doing laundry … I can’t even describe the pile in the basement. Being obsessive compulsive about tasks, I’ve been running the machine non-stop.

Oh, and on the drive home, we stopped for a bathroom break and discovered an awesome farmer’s market. So Kevin made room in our already packed truck for a bushel of romas and a bushel of red peppers. The red peppers are already roasted and in our freezer. The canner is ready to go tomorrow.

But I am overwhelmed and exhausted and daunted by the tasks ahead this week. There seems too much. This is VBS week, assuming the children agree to go (CJ is the wild card; he spent large portions of today in fits over non-existent catastrophes … nothing like a good half hour of crying in the car to make you feel like a holiday is really and truly over; even better if no good reason for crying can be identified by cry-er or his attentive family).

But the thing on my mind most of all tonight is the passing of Jack Layton. What to say? There’s no one like him in Canadian politics. And it seemed his optimism might carry him over yet another obstacle; after all, he made all kinds of seemingly impossible things happen. Cancer. The language we use to talk about it is the language of battle; but I’ve never liked that language because it implies that those who cannot fight it off somehow didn’t fight hard enough, weren’t strong enough, succumbed. A word that implies defeat. I really hate that. I don’t know how to talk about it differently, though. Anyone’s who’s lost a loved one to cancer knows that it feels like they’ve been stolen, sometimes slowly, and sometimes suddenly, by an opponent. I don’t know why we personify cancer like that. I’m trying to think if we personify other diseases in the same way, and it doesn’t seem like it. Cancer seems personal. It seems crafty and sneaky and it doesn’t fight fair. And this morning, it stole from Canada a real fighter, a tough and bright and incredibly energetic person who can’t be replaced. Goodbye from us. We’ll miss you, Jack. 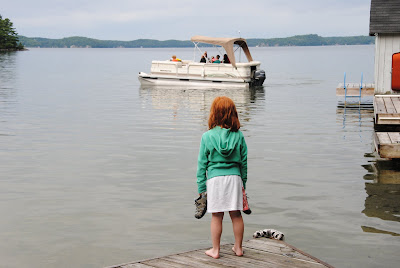 No summing this mess of a post up, I’m afraid. Photos from holiday to come at some later time. Maybe when the tomatoes are good and canned.

Uglifying the yard: a work in progress
Blueberry blues