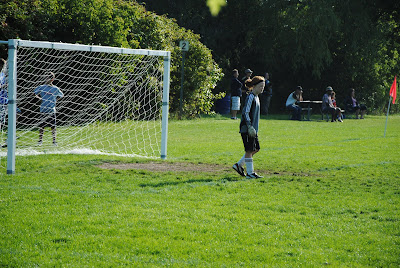 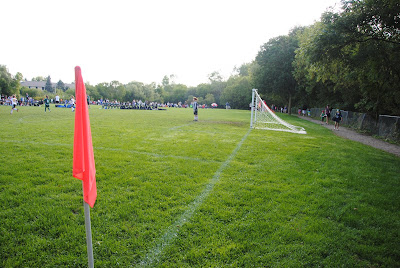 It looks like such a lonely position to play. But she’s grown into it over this past season — her first season ever playing goalie, in fact, which seems remarkable. On Saturday, her team played in a tournament against the other teams in her league. In each game, a loss meant elimination. The girls played with great heart, and never gave up, even when they were down by a goal with a minute left (as in the final game). They tied that game up, and went on to win in overtime by four goals. They also won a game on penalty kicks.

Penalty kicks are what the parents of the goalie pray never ever happen. But this was her second penalty kick experience, and she’d learned the hard way what to expect — all of the girls had. The first time, she thought it was her job as goalie to stop every ball, and was devastated when she couldn’t; we had to explain afterward that penalty kicks give the advantage to the kicker, not the goalie, and no goalie is ever expected to stop them all. This time, the first two balls went in, but she wasn’t rattled by it. Her team was behind by one shot, but she stayed cool as a cucumber. She stopped the next shots cold, her teammates landed theirs, and that was it. Game over.

Tears and hugs on the sidelines, and a mad rush to congratulate the goalie.

It’s a lonely position, but also a very visible position. What seems so remarkable to me is that she isn’t bothered by either factor. She isn’t fazed by failure, or success. When I complimented her on keeping her calm even after a goal had been scored on her, she said, “Well, I wouldn’t be a very good goalie if I got bothered when a goal was scored.”

It’s also a dangerous position. Making one stop, she was run over by a girl on another team (no call made by the ref), and knocked in the head by the girl’s foot. Her comment? “I think that girl needs to work on her jumping.” But there she was, fearless among the feet, grabbing the ball. Amazing focus, and amazing instinct — to dive toward danger rather than flinch away.

Her parents on the sidelines were playing a very different part in the story. It’s so hard to watch, and to care so deeply, and to be unable to act. I’ve started to understand that my only role, on the sidelines, is to believe in her. She obviously believes in herself.

When the day was done, Kevin and I felt drained. The team was elated: they’d made it to the final, which they’ll play in a couple of weeks. “Was that fun?” I asked Kevin. We couldn’t decide. It was an experience. There are dimensions to parenthood that never entered my imagination when I was gestating my babies: the way your children will lead you to places and through experiences and emotions you never knew you’d be obliged to go — and privileged to go, too.

Blueberry blues
Something I keep thinking about