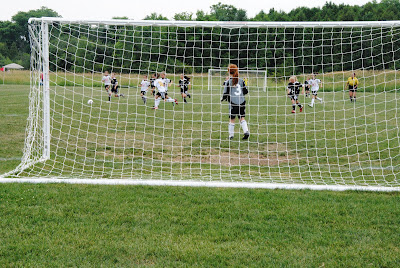 This is my girl. This is where she plays, most of the time, and she plays like it’s right where she belongs. I was, frankly, kind of petrified of having my kid play in net, but as the season has progressed, I’ve come to have confidence in her. It makes standing on the sidelines so much easier. She’s not going to be perfect on every play, but she’s going to be tough and engaged and focused. And aggressive. She jumps on the ball, no matter how many feet are coming at her. She’s learning how to kick it out solidly (practice with her goalie uncle on Canada Day weekend helped). 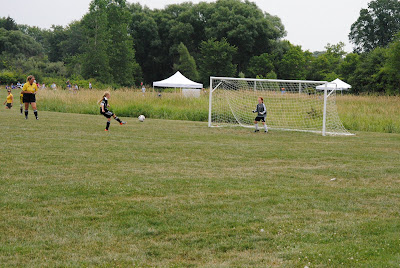 Today, her team made it to the semi-finals of a tournament. They played against the other Waterloo team in a match that was equal and well-fought. It went to penalty kicks. This is her, right before she stopped the first kick. I stood behind the camera as a way to control my emotions: pride, really. It was all pride. But my girl’s team did not win. They ran along the sidelines at the end, for the ritual high-fives from all the parents, looking heart-broken. My girl was at the front, positively bereft. 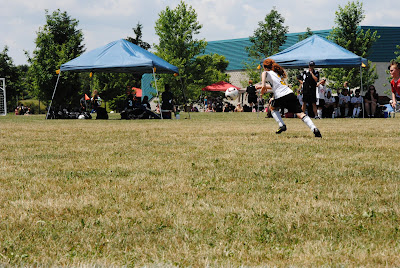 But she’s recovering. Heart-broken is good, in a way. It means she cares a lot about how she plays, and wants to play better. It’s good if it doesn’t defeat a person. And I don’t think it’s going to defeat her. I tell you what makes me most proud: it’s seeing her play her heart out, no matter the final tally. It’s seeing her work hard and never give up. That’s the best gift a parent could ask for. So, so proud, that was all I could tell her when it was over.