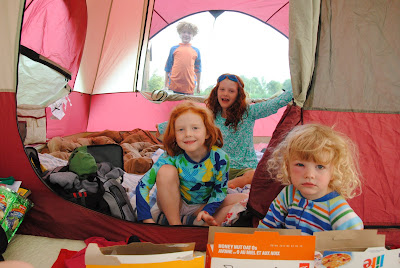 Camping with class: two rooms, bay windows, cereal buffet. (We buy cereal only in the summertime, as a treat, and it’s a good strategy for gaining an extra half hour of parental dozing). 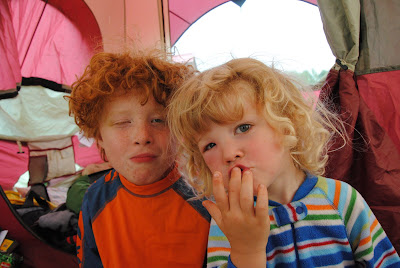 Notice CJ’s eye? We like to make it a tradition to have at least one child with a mystery ailment on our Canada Day camping trip. This time it was CJ and a well-placed bug bite that made him look like a miniature boxer, post-bout. CJ also starred in a classic first-aid moment of panic while Kevin was in Tim Horton’s getting coffee (about an hour after this photo was taken). The kids and I were waiting in the car. CJ started yelling about something up his nose. “Did he say ‘rock’?” I asked (not at all calmly). Yup, a little fossil he’d found on the farm and decided to put up his nose (“Why?” the others wondered, but there are no answers to questions like these). In short order, the rock was removed. By lollipop stem. As grabbed from one of the car’s compartments (what? no first aid kit?). Quick thinking, Mama. AppleApple thought it might cheer CJ up to get to suck on said lollipop post-op. But we saved it for later. Because you never know. 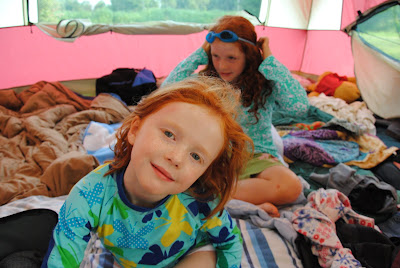 This is the fifth summer of camping on Chach and B’s lawn, under the apple tree. Is it an apple tree? Lots of birds singing in the dawn. 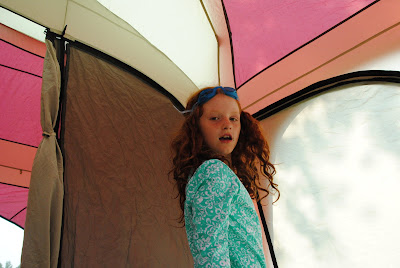 Next on the day’s agenda: the beach. But first, a detour for some coffee. Lord have mercy.