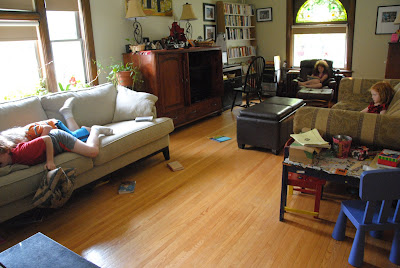 Because, though I could look at those triathlon photos forever (and probably will), the moment has passed, and life goes on, even if it appears frozen here in Blogland.

So … in other news: we got a new couch! (Pictured above). We lucked on it half-price back in April, ordered it, and kind of forgot about it, the way one does, until the company called to say it was coming. Now. Queue frantic clearing of living-room. And then queue um, where was this supposed to go, honey, do you remember? Because we’d originally intended it to replace the ten-year-old sofa (aka gymnasium), now sway-backed and spring-popping. But the new couch looked too lovely and clean, and besides, the living-room lacked seating; wasn’t that the whole point of the new couch? So we spent our Friday evening huffing items back and forth (books! shelves! toys!), removing a few, dragging the piano to a new and starring location, hiding the communal computer (somewhat), and keeping both couches. Almost got it finished before Kevin left for his Friday night soccer game.

Right away, the kids started arguing over WHO GOT TO PLAY THE PIANO. I kid you not. I had the kitchen timer going.

The new lay-out has more reading areas. More seating in front of bright windows. More seating, period. And the piano is getting played far more frequently. 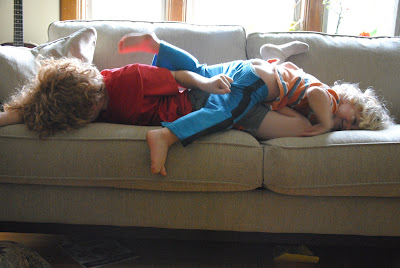 Though this is not meant to be a commentary on Boys versus Girls, or Sons versus Daughters, or Mars versus Venus, here’s what the boys were doing in the newly laid-out living-room the other evening. 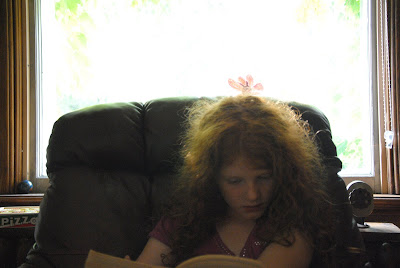 And here’s what daughter # 1 was doing. 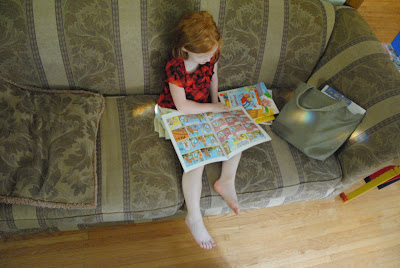 This is not to suggest that daughters don’t wrestle. But whenever daughter # 1 enters into the fray, holding a pillow, with a gleam in her eye, I shut the show down. I don’t think this is sexist, really, I don’t. It’s because she aims with intent. Somehow, the boys wrestle without doing each other any harm. But AppleApple comes out swinging. She wants to Win. (Maybe I am parenting her differently. What do you think?).

Day of Triathlon
I can't get enough of these photos