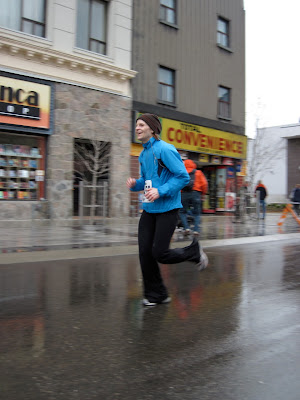 I’m beginning to wonder whether I’ll become someone who enters races and obsessively tries to beat my last best time. My personality-type just does not allow me to relax and finish at a comfortable pace. Instead, I try to run to my limits, calibrating throughout the race how much harder I can push myself. The physical part of the race almost seems insignificant. It’s the mental part that takes all the work and the toughness and the guts. I’m not sure I could have gone quite so fast in today’s 10km run had my friend T not been behind me pushing me all the way along. I knew she was tough — she’s done Ironman, and she was running today on an injured foot and therefore much less running training than me, but there she was pushing me on. Somehow knowing and trusting her mental toughness made me push even harder to find my own. Thank you, T!!!!! You’re an amazing competitor!

The first half of the race I ran a bit faster than originally planned and I felt a slightly more fatigued than I would have liked. But once half the race was done, I believed it was possible to keep pushing at least that hard for another 5km. Since it was a loop, I knew exactly what to expect. I took advantage of every downhill to pick up the pace, though I did use one downhill, at about 7.5km, to rest just slightly and try to restore my breathing (it didn’t help much). I was disconcerted by my breath — I sounded like a freight train coming through, and I’d hoped to sound much more relaxed. It really felt like a mental game that I was playing with myself. I would feel a flash of doubt — can I keep this pace going, or am I going to slam into a wall? And then I would find a reason to keep the pace going. I pictured a friend’s daughter, who is an amazing runner, and I thought, she wouldn’t slow the pace. That’s not how she wins races.

Not that I was going to win this race, you understand. It was a race against myself, essentially. I did have those times in my mind: 55 minutes was what I believed was within my means, and I wanted to do it in 50, at 5 minutes a km, which is fast for me. Honestly, I’m not sure how I made it that last kilometre. I couldn’t look directly ahead, oddly, but it seemed easier when I looked to the side, almost as if seeing the finish line wasn’t going to help me. I was in the zone. The zoned-out zone. I couldn’t even wave or smile at friends. Yet I found it within myself to sprint to the finish, a longer sprint than my body wanted to do, but why stop now?

The time on the clock was so exciting that I threw my hands into the air. Under fifty minutes. And my official chiptime clocked me in at 47:54. THRILLING. Honestly, I could not have run that race any faster. I threw everything into it. I finished 6th in my age class, and 16th among the women overall (there were 113 women who finished the race). That’s insanely better than I ever did in high school. I wish I’d recognized my own potential back then, and trained properly. But you know, even with all the training in the world, I’m not sure that back in high school I would have had the mental courage to run the way I ran today.

That’s what makes running so hard, I’m beginning to see. The training is important, of course, but to go fast, you have to be willing experience deep mental (and physical) discomfort. I’m pretty sure the runners who break records are willing to run to the very edges of their physical limits, and that’s simply not easy. I did my best today, but I’d have to train even harder to push the edge of my physical limit. Man. Part of me wants to do exactly that. But during the race, the thought I kept shoving back down was — this is WAY TOO HARD and you are NEVER GOING TO DO THIS TO YOURSELF AGAIN!

Sorry, self. I think I just might. The high of crossing the finish line, the high of knowing I pushed as hard as I could — well, it’s a bit like childbirth, really, though on a slightly reduced scale of pain and ecstasy. It’s not fun ’til it’s over, and then it’s right up there with the most amazing feeling you’ll ever have the privilege of experiencing.

[this entry is cross-posted from my triathlon training blog]

Annabel, by Kathleen Winter
A Week in Suppers: 8