A Week in Suppers: 9 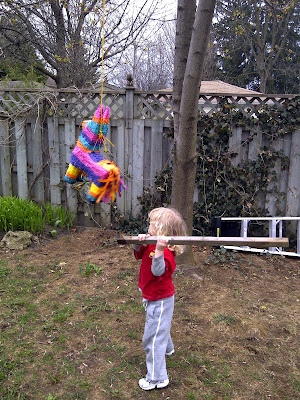 Monday supper. It was my mom’s birthday, and we decided on a Spanish theme. My brother and his wife hosted. On the menu: refried beans, rice, two kinds of Latin American cheese, plus crema, tortillas, guacamole, salsa and chips, a big salad, and a fruit crisp with ice cream for dessert. Oh, and a pinata! This was voting day in Canada, too, though election results were disappointing (in our household): we now have a Conservative majority, voted in with 39.5 percent of the vote. Yes, that’s how our multi-party, first-past-the-post system works. But enough on that. I started the morning with a swim and a run, and it was on the track that I heard the news about Osama Bin-Laden; two men were discussing it as I ran by. Which oddly means that two out of three news-worthy events last week are connected in my mind with the Rec Centre: a wedding and a death. It was a writing day. Kevin and I voted together after lunch. The kids had swim lessons after school, and CJ survived without me, again. Next lesson, I’m supposed to come sans swimsuit. And he’s supposed to not cry. 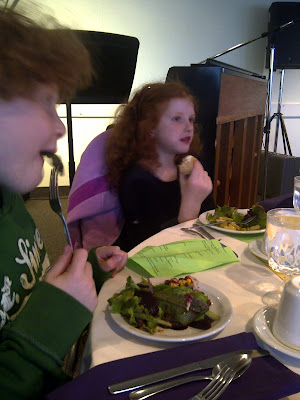 Tuesday supper. It was my dad’s retirement dinner. We were fed by the kind cooks at Conrad Grebel College; because I worked one year during university in that same kitchen, all the cooks came out to say hello. Considering eighteen years had elapsed in the meantime, very little had changed — they were all still there! On the menu: a variety of salads, Swedish potatoes (think butter), and beef roulade (chosen by my dad; I’d never heard of it: beef pounded flat and wrapped around bacon which is wrapped around a pickle!). Kevin brought the two eldest kids, but left with them after dessert as it was already past their bedtime. They missed hearing my siblings and me sing two songs with Dad as our retirement gift to him. Don’t ask us to do speeches, but we can sing and play. I started the day with a freezing bike ride, 20km, and my hands were numb by the end. It was a pleasant, at-home day otherwise; and Kev got home early so I could race to the library and bookstore before going to CGC early to practice. I left the little kids with buttered noodles for their supper, and CJ was won over by the babysitter. A good day all around, but a late night for this early riser. 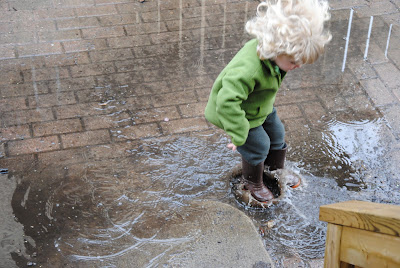 Wednesday supper. This is not a photo of Wednesday’s supper, but is representative of the early part of the week: rain, rain, rain. I forgot to take a photo. I went with an easy crockpot lentil soup, mild curry flavours, and baked rice. I was up early to run with a friend, and it was a full writing day. I’ve added an extra afternoon of babysitting to my week, and I’m grateful for three full writing days each week (meaning 9-3:30, essentially). Kevin took the kids to music lessons after school, and I went to a yoga class instead. I also accompanied Albus to his piano lesson and speed-read poems for my poetry book club. Wednesday is our new date night, but it’s a temporary hacked-together shelter of a date night. We have no free Saturdays this month and Kevin plays soccer every Friday, making this our only unoccupied evening in the whole week. But we aren’t even bothering with babysitting. We’re aiming low: it would be nice to meet on the couch and talk. 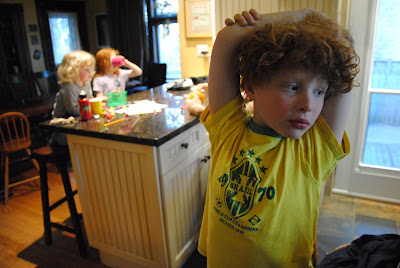 Thursday supper. This is not a photo of Thursday’s supper. This is a photo from snacktime, Thursday night, when I realized there was no supper photo. Today, I baked bread. For supper there was pasta, leftover red sauce, steamed broccoli, and marinated tofu which Kevin grilled on the BBQ. I left him in charge and went to a vinyasa yoga class. He managed to save me three pieces of tofu: the little kids LOVED it. This was my morning off, and Kevin went to an early yoga class instead. We enjoyed playing at a friend’s house all morning, and the sun decided to shine, at last, too. In a few days, we’ll have leaves on the trees. On the way home from yoga, I stopped in to offer my opinion about our region’s proposed Light Rail Transit line. The elderly woman behind me only wanted to complain about the likely cost, but I’d rather invest in infrastructure that offers alternatives to the car than invest in more roads. (I did not turn to her and say: Think of your grandchildren!! Maybe I should have?). AppleApple headed to soccer practice as soon as I got home, and we failed to coordinate carpooling, which wasn’t very alternative of us. 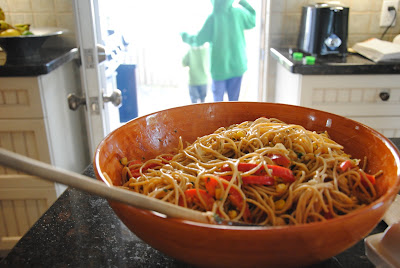 Friday supper. Finally a photo of supper: this was a noodle salad with peanut dressing (made with leftover noodles). I also fired up the BBQ for the first time in my life, and grilled sausages. Um, that was easy. I started the morning with an early swim, and enjoyed a writing day. Kevin, who is in charge of the “dentist portfolio,” took ALL FOUR KIDS to the dentist for their checkup. Only one poor soul, who shall remain nameless, had cavities: four. More dentist visits in the weeks to come. After Kev dropped everyone off at home, most went outside to play and blow bubbles. It was pretty idyllic. Kevin had soccer, so we arranged for a babysitter to come, so that I could go to a craft night at a friend’s house. Except I was lame and didn’t craft a thing, not even one felted ball. I just chatted ’til I was too sleepy, and it was time to head home. 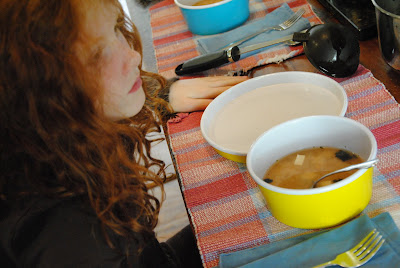 Saturday supper. I wasn’t in the mood to cook, and the kids were desperate to go out to eat, but we decided to be thrifty (new porch and all), plus the fridge was overflowing with leftovers. I heated up the peanut noodles, which were delicious, and made miso soup, which is basically instant contentment in a bowl, and we had noodles on the side for those who prefer their noodles plain. There were a few leftover sausages, too. Plenty of food. It was a busy day, with Fooey starting soccer, and AppleApple’s theatre rehearsal, and a playdate for Albus, and a bike ride/run combo in the afternoon for me, and a real soccer game for AppleApple in a nearby town (to which Kevin took the two youngest). After all that, the kids and I flopped on the couch and watched two episodes of The Amazing Race (we haven’t seen the finale yet). I like watching TV with them. CJ hops on me, Fooey snuggles in close, and everyone talks the whole time. Then we had bath night, and got the little kids to bed. I went to my poetry book club where we had a lively discussion that lasted far later than it seemed; and with the return of the babysitter, Kevin went out and saw friends playing in a punk rock cover band. 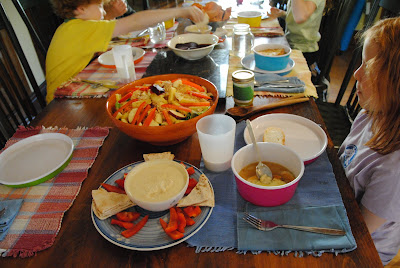 Sunday supper. It was AppleApple’s turn to cook, and she devised a scrumptious menu: homemade hummus with pita and veggies; French onion soup ladled over toasted bread with cheese; Mexican Christmas salad, which was lettuce-based with tons of fruit and a lime dressing; and cheesecake for dessert (bought). We shared supper with my mom: Mother’s Day! And I had the best day. I slept until I felt rested and ready to wake up (9:30!!!!). AppleApple made me an egg to order: sunny-side up. Kevin took all the kids grocery shopping while I read the paper and played piano. I took AppleApple to her soccer practice and went for a long beautiful run along trails that follow the Grand River. And I didn’t have to cook supper! I tidied up toys, Kevin vacuumed, and I did dishes for approximately forever, and after bedtime we met on the couch to peruse the coming week. And from the looks of it, it’s only getting busier.

Two Recipes
The Message I've Been Waiting For