A Week in Suppers: 8 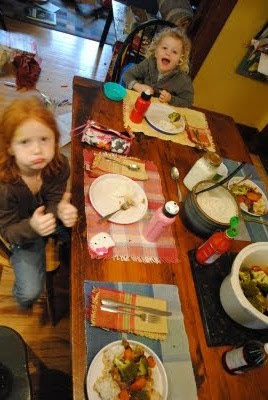 Monday supper. Ginger beef in crockpot, with tofu and brocolli. Baked rice on the side. The kids were off school today, but Kevin had to go to work (Easter Monday). I swam and ran early, and napped early, too, before Kevin left for work. I managed to file a story while the kids played. Or maybe they played wii, truth be told. In the afternoon, the kids and I went to a super-delicious “soup party” to which I contributed a big cake-shaped paska. It rained most of the day, but the kids played outside — soccer and hockey. We dashed home to get changed for swim lessons. CJ and I had many long chats about going in the pool alone, and he mostly said, “NO!” but was swayed, sort of, by the idea of a treat afterward (oh bribery!). When we arrived at the pool, my heart fell — his regular teachers were both sick; two substitutes instead. It turned out not to matter, though; the teachers kindly let me get in the water, too, and CJ willingly went with them, while occasionally leaping with a fake pout toward me. Mid-lesson we took a bathroom break (curses! this happens every time!), and when we got back, the kids were putting on life-jackets and playing with toys. CJ was thrilled. He didn’t even noticed when I climbed out of the water, and he waved happily to me for the rest of the lesson. Afterward, he got his treat: to spend a quarter at the candy machines. Of course the other kids got in on the quarter action, too. Dentist appointment next week. Is this a case of short-term gain for long-term pain? We squeezed in drum and guitar lessons after eating supper together. Kevin practiced soccer at 10pm. 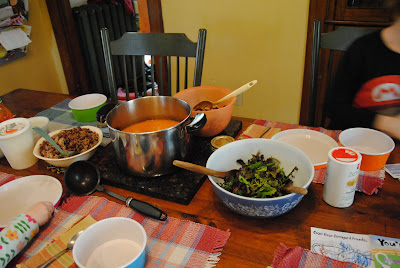 Tuesday supper. Roasted red pepper soup with homemade croutons. Gallo pinto on the side. Green salad. (Gallo pinto is beans and rice fried together: always delicious, and an easy way to use up leftover rice and/or beans). The soup was delicious: I used red peppers roasted and frozen last summer. I had my last spin class of the season (everyone’s riding outside now). The little kids and I enjoyed a quiet morning together, and then our babysitter arrived for an extra afternoon (thank heavens — I missed two writing days due to Easter!). Kevin came home early so I could go to yoga. We waited and ate supper together, though AppleApple ate late, due to soccer practice (successful carpooling!). There were playdates all around after school. And the sun was shining. 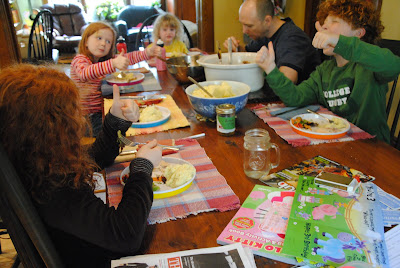 Wednesday supper. “Roast” chicken in the crockpot: seasoned with garlic, onion, and sage. Green salad. I peeled and sliced the potatoes first thing in the morning, and kept them covered in cold water until arriving home from music class: then I boiled and mashed them up fresh. No one had to race off anywhere, so we could eat at our leisure: big thumbs up around the table. Today was an unusual day and I did not get a lot of writing done. Instead, Kevin and I met for lunch, and I decided to go ahead and buy a road bicycle and all the accoutrements. Exciting, and terrifying. (I hate spending money, especially on myself). After supper, I walked Albus to piano, and then jogged over to my dad’s to practice, along with my siblings, for his upcoming retirement dinner. We are singing and playing two songs together. My sister Edna and I worked out some pretty harmonies. We didn’t even know we could harmonize together. It took longer than expected. I ran home after Montreal tied up their game seven to go into overtime; and wasn’t home long before the goal that killed their playoff dreams was scored. Kevin was watching, of course. 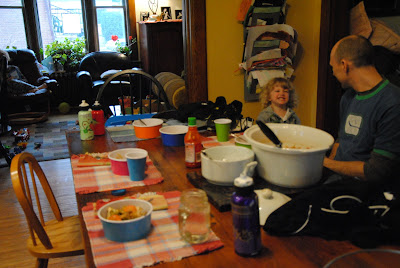 Thursday supper. Sweet and sour chicken and tofu in the crockpot (oh, and a bit of leftover beef and brocolli, too). Served with baked rice. Kevin got up early this morning for yoga, so we are back to our regular schedule. The kids and I enjoyed playing with friends in the morning, then dashed to the grocery store. I also baked bread, made yogurt, and supper, and hung laundry in the early afternoon: domestic multi-tasking hell, to be perfectly frank. But it all got done in time for me to go to a vinyasa yoga class before supper where we tried a crazy upside-down hand-stand. We cancelled our babysitter due to AppleaApple’s soccer practice, which was then cancelled last-minute due to rain. Oh well. My dad and sister came over to practice the harmonies some more. Good feelings all around. 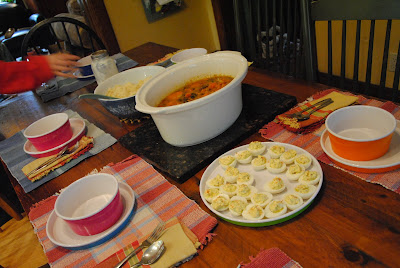 Friday supper. Braised squash, yams, and chickpeas in the crockpot, with couscous on the side; devilled eggs, too. (Leftovers were also served). The braised squash was a pitiful fail. I think it was the mushrooms I added to the mix. It was something. There was a funky scent going on. Sometimes crockpot meals seem to go from delicious to overcooked in the waning hours of the day. Next time, no mushrooms. At least the buttery couscous was delicious, and everyone liked the devilled eggs. After supper, we dumped the squash straight into the compost, though Kevin and I did eat a fair share; weirdly, it tasted okay, it was just smelled disgusting. I didn’t blame anyone for not trying it. Albus had a friend over who politely thanked me for supper. I felt like apologizing: sorry, kid, I know it was gross and you ate cold leftovers instead. Don’t tell your mother. I had a writing day, and started the morning with a swim. Kevin and I got some tv time together after the kids were in bed. We also met with a different contractor about the porch/office project, and with more optimistic results. We both like this man, we like his work, and his quote was significantly less than the previous quote, and within our budget. It looks like we will be getting the ball rolling over the course of the summer. AppleApple and Albus are already plotting who will get to claim the spare room upstairs (and Fooey and CJ would like to share a room). Lots of groundwork ahead: architectural drawings, permits, etc. We are all dreaming. 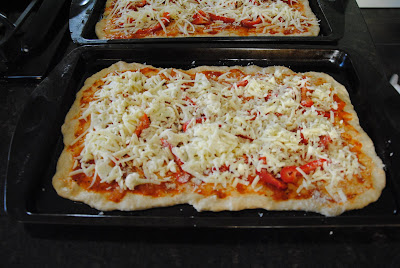 Saturday supper. Homemade pizza. The grownup portion had sliced cauliflower and hot pepper flakes, in addition to the kid version of roasted red pepper and cheese. I served nothing else, and we ate every last slice. Uh oh. Double batches, here we come. This was a fairly low-key day, and we finally enjoyed sunshine and warm breezes. There was soccer, of course, and AppleApple’s rehearsal for her theatre performance coming up at the end of the month, and errands, a birthday party, and also my first bike ride ever on a road bike. I only fell once, and it was at a stand-still into grass (the clip-in pedals take some getting used to). I’d meant to take the day off to rest for race-day tomorrow, but oh well. It was just too fun getting out into the sun and riding fast. 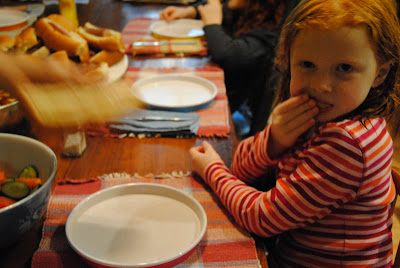 Sunday supper. Homemade burgers, nitrate-free hot dogs, homemade french fries, cut-up veggies. Kevin did most of the work, though it was supposed to be “cooking with kids”: Albus’s turn. He and his friend chopped the veggies, then went outside to play (messy, muddy, sandy play = ridiculous amounts of laundry!). The french fries were delicious. I ate more than my fair share. The morning was focused on my 10km race: my maiden voyage. It was so hard. I was chilled to the bone afterward, though I didn’t notice it until we got home and Kevin said: “Your lips are blue.” I took a long, hot bath. The kids gamely came along despite the rain, and my mom even got to see part of the race: she walked over from her church, which was nearby. Fooey’s favourite part was the hot chocolate: “I love hot chocolate,” she reported when someone asked her how the race was. I tried to nap, but was very physically wound up. Instead, I wandered around uselessly, and did a bunch of laundry. My dad and sister, and one of my brothers came over to practice again. I think we’re all set for Tuesday’s performance. One more chance to practice with the mics and the sound on Tuesday afternoon. The kids and I finished off the day together, watching an episode of The Amazing Race. We’re starting a bit late in the season, but it’s an easy show to follow. I really really enjoyed it. Sometimes tv is alright. I fell asleep last night just before the Obama announcement, though I did see it coming on Twitter. I heard the news about OBL early this morning, when I was running on the indoor track: two old men were discussing it. Funny, my Royal Wedding moment happened in the same building on Friday morning. I was swimming, and I looked up through my foggy goggles and saw the tv in the snack area: there were William and Kate pledging their vows. I watched for a breath or two, and thought, there it is, my wedding moment.

And there it is: our week in suppers.

Mental Fitness
Tip of the day