A Week in Suppers: 6 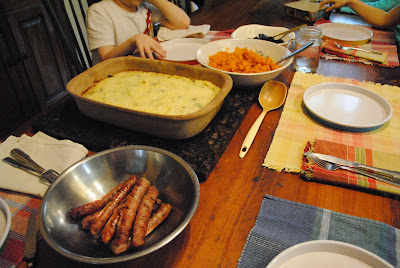 Monday supper. Grilled sausages (breakfast, because that’s all we had left in the freezer). Mashed potato casserole (lots of cheese). Squash and beets cooked whole in the crockpot. Swim lessons were cancelled, so I had more time than expected after school to prepare supper. Not that it mattered. I’d made the casserole the night before and popped it into the fridge. It needed about twenty minutes in the oven. Most of us liked it. I would make it again, as a way of using up leftover mashed potatoes. Anyone out there have ideas for leftover potatoes? I’m stuck in a cottage pie/shepherd’s pie/casserole groove. I mashed the squash with a touch of maple syrup, and butter; always good. That was the last “keeper” squash and it was a bit soft at the top. The beets were so far gone I wasn’t sure they could be ressurected, but they steamed up nicely, and despite a slight overall rubberiness, when sliced and salted, they were sweet and tasty. But I’m tired of beets. And no one else will eat them. Kevin had soccer. I swam in the morning. In between, the kids had school, and CJ stayed for the “lunch bunch” at his nursery school, giving me an extra half hour to work. Or to nap, as the case may be. Then we went shoe shopping (for him) and clothes shopping (for me). It felt very car-based and suburban. Especially when I filled up the truck with gas. Good grief! 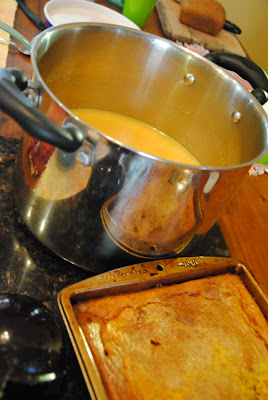 Tuesday supper. Curried carrot soup. Quinoa. Squash and egg casserole (big-time 70s recipe). On the soup, which should have been good: the curry flavours needed to be stronger. A friend sent the suggestion when I complained about the blandness of last batch of carrot soup (thank God, this batch marked the end of our carrot invasion). She suggested grating in fresh ginger at the very end to add an extra pop. But I cooked everything together and was far too conservative with my spice amounts. I froze the leftovers for a quick meal another time: will bump up the spices upon reheating. I would call this meal not a flop, exactly, but tinged with disappointment; nobody but Kevin and me ate the squash casserole, which was almost dessert-like and delicious, but decidedly unattractive. I napped early, almost immediately after getting home from spin class, and had lots of energy all day, enough to make it to yoga before supper. AppleApple had an outdoor soccer practice, so Kevin had the unenviable job of packing up CJ, and driving to pick up Fooey (on a playdate), then AppleApple (on a playdate), then Albus (on a playdate), and then racing to the soccer field. We ended up eating supper together, minus AppleApple, whom I picked up after supper. She’d eaten a bunch of snacks on the way there, but was famished enough to have a helping of squash casserole. CJ insisted on riding along to the soccer field, but I made him promise to listen to the federal leaders’ debate on the way. It put him to sleep (gah!), but somehow we managed to transfer him from truck to bed, and then to fool him into thinking it was very very late at night when he woke restlessly around 8pm. He must have been tired. He slept for a full 12 hours. The rest of the family stayed up watching the whole debate, and talking about what we’d heard. Then Kevin went to hockey. 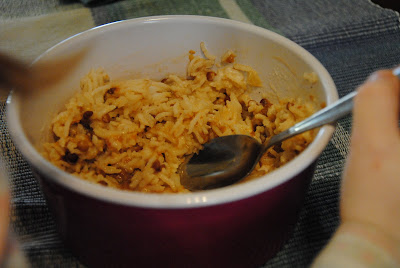 Wednesday supper. Crockpot lentil soup: the harira recipe on this blog, over rice. Nice. Could have used a side veg, but I had nothing convenient on hand. This was an oddball day. CJ stayed for lunch bunch again, and my friend J picked him up, and I got to go for a massage instead! Woot! It was my gift to myself post-race. I also met with my brother in the morning to talk about cookbooks. I was floating the idea–the underdeveloped notion, more like it–of making a cookbook loosely based on this “week in suppers” theme. Talking to him (he works for a company that publishes a lot of cookbooks) put it into perspective. The work involved would be staggering. It might not be the best use of my time. Unless I do it slowly, over time, gradually gathering recipes and photos until I have enough material to justify putting a book together–and then arranging for recipe testing, etc. Fiction-writing is a better use of my time: that’s what it confirmed for me. Other nice things happened today: I went for a morning run with my friend N; I ran a quick errand uptown all by myself; I ate a spinach and feta pastry for lunch; my friend M took the little girls to their music class so I didn’t have to leave the house; and Kevin came home early so I could go to yoga. I took Albus to his piano lesson and read Annabel, by Kathleen Winter, a book I liked so much–loved might be the word for it–that I think I will blog about it soon. 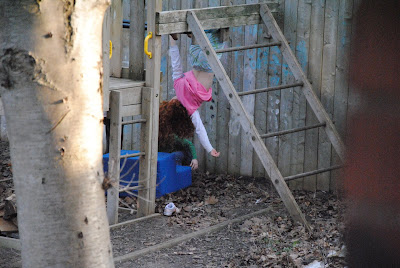 Thursday supper. Beans and rice, with quesedillas and red cabbage salad. This entire week had flop written all over it. I don’t know how I managed it, since beans are my specialty, but somehow, when suppertime arrived, these were still hard in the pot and required a full hour of extra cooking time. So I fired up the cast-iron skillet and made a pile of quesedillas using corn tortillas (like a Latin American grilled cheese sandwich). Albus ate about six. AppleApple was at a birthday party, from which Kevin picked her up early to go to another soccer practice. The little kids played outside, and no one complained (too much) about being hungry. We ate late, when the beans finally softened. I forgot to take a photo. Instead, here’s AppleApple from another afternoon this week: yay! We have new space to play, now: it’s called Outside! (Or we did last week, before it decided to snow again). And we have big plans for backyard improvements (though I think we’ll pass on the water slide from Albus’s bedroom window down to a trampoline, as was brainstormed during Saturday night’s supper). Kevin and I had kundalini yoga, and then I put on my dancing shoes, and drove to nearby Guelph with two friends to go dancing. My siblings’ band was playing a show. Here’s a link to their latest video. If you ever get a chance to see Kidstreet play live, go go go! They throw down an instant dance party. That was a late night, especially considering my day had started at 5:15–to go swimming. But that’s okay. I told Kevin just before I ran the half that this coming week would be my party week. 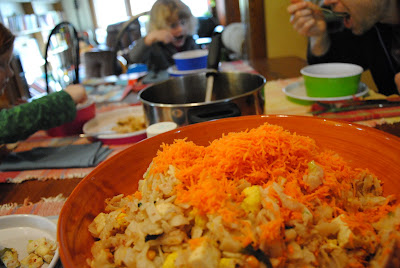 Friday supper. Finally, success!!! I made miso soup and pad thai. Both were fabulous. The pad thai recipe was different from the usual ones involving ketchup: the sauce was 1/4 cup of fish sauce, 1/4 cup of fresh lemon juice, and a whole lot of sugar. I had some frozen cilantro that I added to the mix. The miso soup is so good and so simple that I made it again for the kids’ lunch the next day: it’s basically instant soup, if you have the ingredients on hand (miso paste, seaweed, and tofu). I was thrilled to have made a meal that everyone loved. AppleApple was at a playdate after school and arrived home toward the end of the meal. My late night/early morning combo (plus a morning run) caught up with me around 7pm, so Kevin did the dishes while I crashed out on the couch for about an hour and a half (!!!). Woke in time to tuck kids in, then we flopped and watched tv: Parks and Rec, and 30 Rock, and we tried out Modern Family, which I liked more than I’d expected to. Albus tried to stay up too. “What are you up to?” I asked him, when I discovered him hanging around the kitchen past his bedtime. “I’m observing,” he said. 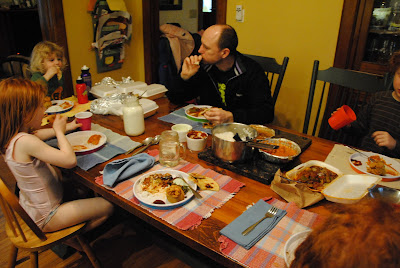 Saturday supper. Take-out Indian from our favourite spot in town: Masala Bay! Kevin worked today, and I was tired. I managed to bake bread and granola, and to take the kids to the little park in a rainstorm, and to arrange transport for AppleApple, who has both Singer’s Theatre in the morning, and soccer practice in the afternoon (I asked her yesterday, picking her up from her FOURTH practice of the week, whether she feels she’s doing too much, to which she replied, “No!!!” She loves soccer. She likes being busy. She had difficulty imagining that a parent could push a child to do something the child wouldn’t want to do, anyway.) I had zero inspiration for supper. What a treat to order food that would have taken me an inordinate amount of effort to prepare. Samosas, pakoras, nan, black lentils in cream and butter, a fiery eggplant dish, butter chicken, chicken in chili and coriander. We feasted. We stayed at the table for over an hour, talking and laughing. CJ is still a bit young to participate fully, and he does end up interrupting and yelling sometimes, or dropping his fork to get attention, but I am otherwise relishing the stage that our family is at, and how much pleasure we get just from spending time together around the table. That evening Kevin and I got to party some more, to celebrate my friend J’s graduation from midwifery school. More dancing, and free drinks. Another late night. 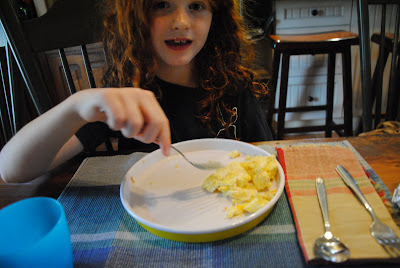 Sunday supper. Leftovers and scrambled eggs. There were enough Indian leftovers for an entire second supper, to which AppleApple added scrambled eggs made-to-order. I’ve been giving the older kids more freedom in the kitchen, and they spent a lot of time last week making tea (after getting permission to use the stove). AppleApple was keen to learn how to make scrambled eggs, envisioning herself rising early to cook herself breakfast (which would be, frankly, awesome). It was a fairly tricky process, but by the end, she made a batch without anyone watching over her shoulder. The gas stove makes it feel more dangerous, but it’s time for the kids to find real independence in the kitchen. And it’s time for me to ease up and let them. (On a side note: CJ agreed to be three this week: because he wanted to take a turn at cooking, and I told him that it starts when you turn four. “And you’re still two, so that’s a long way to go.” He considered his options briefly, and told me, “I’m three now.”) We’ve noticed some improvements in responsibility, and I think it’s more to do with my own expectations than with their initiative (or lack thereof). Tidying the house yesterday was so much easier with everyone responsible for their own spaces, and helping out overall: they helped because they were expected to help, and they got that. But I’m a bit of a control freak in the kitchen (just ask Kevin), so I’m reminding myself to back off and make space for everyone else to help out here, too. No exercise yesterday or today. Yup, it was a party week. We ended the day with homework completed, piano practiced, and a planning meeting over a pot of tea: always a good entry into the new week ahead.

Up Up Up
Ups, Downs; Downs, Ups