A Week in Suppers: 5 Monday supper. Carrot soup with potatoes, vegetarian version (I had run out of frozen chicken stock). It lacked the oomph without the stock flavours to balance it out. Passable. Cooked in the crockpot. Pureed just before setting it on the table. Swim lessons after school. The kids are enjoying it more than they’d expected. Fooey’s class was in the deep end, in the same lane where I swim in the mornings. I ducked out after supper to meet my siblings for a beer. Half a beer, and a ginger ale, in my case; spin class early tomorrow morning. 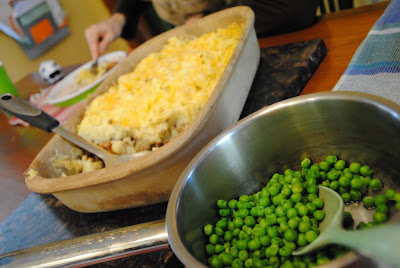 Tuesday supper. Cottage pie with lentils and ground beef. I had to use up leftover mashed potatoes from Sunday’s supper, ergo, another cottage pie, this time bulked up with lentils. And of course carrots. We still have an overload despite yesterday’s carrot soup. Apple-Apple has soccer practice, outside, fairly early, so we are eating early on Tuesdays. Kevin is still playing hockey, too, but at least that’s post-kids’-bedtime. If they get to bed on time. Wednesday supper. A frozen container of leftover chili, reheated in the crockpot all day, along with some frozen corn (the last from last summer; I am positive this time), and some frozen spinach. Baked rice on the side. I ate a bit with the family, post-music-lessons, then raced off to hit a yoga class. Feeling very achy. Decided at yoga to take it easy for the next two days, to prepare for the half-marathon. The kids also had drum and guitar lessons while I was out, and Kevin took Albus to his piano lesson, before skedaddling to soccer practice. I came home from yoga and scarfed down these leftovers. Tasty. 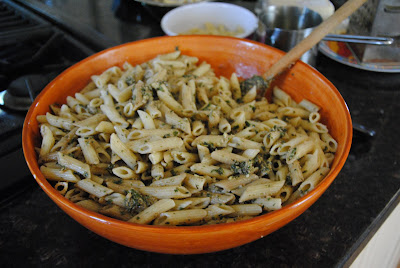 Thursday supper. Green pasta. Carb loading in advance of Saturday’s run. Also, everyone likes this meal and it’s super-easy. AppleApple had more another soccer practice, and Kevin went to kundalini yoga alone. I went to bed with a book. 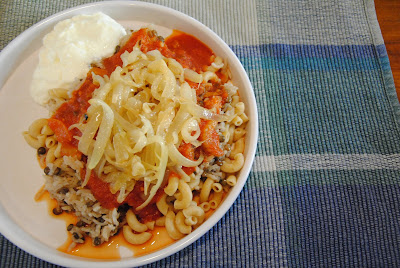 Friday supper. Kusherie. An Egyptian feast. Lentils and rice steamed together. Cumin-spiced tomato sauce. Served on a bed of macaroni. Topped with fried onions. Can we all say “Hurray!” and “Yum!” But Fooey thought it looked disgusting. There was a long drawn-out scene (the word “disgusting” is forbidden at the table). Sigh. It had been a PD day, and I’d been home alone with the kids all day. All I wanted was to enjoy a feast, clean up, get the kids to bed, and go to sleep in preparation for tomorrow’s early rise. 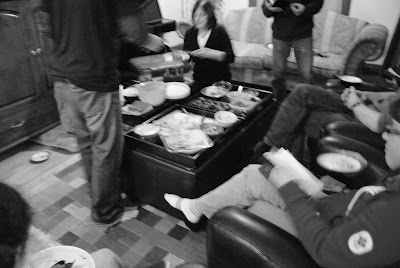 Saturday supper. This is not a photo of Saturday’s supper (we had leftovers; after the race, I did nothing but nap, write, and float around feeling amazing and not in the least in the cooking mood). This is a photo of the snacks brought by my poetry book club, who met here on Saturday evening. There was an absolute feast of snackeries. There was even cake. 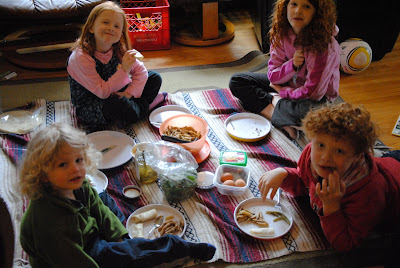 Sunday supper. This is not a photo of Sunday’s supper (we had a BBQ, Albus-directed: hot dogs, hamburgers, and potato salad, with an inexplicable giant bowl of mashed potatoes, too). This is a photo of Friday’s indoor picnic with the kids. It was really fun. Hummus on tortilla wraps, veggies, boiled eggs, apples, and homemade green bean dill pickles.