A Week in Suppers: 4 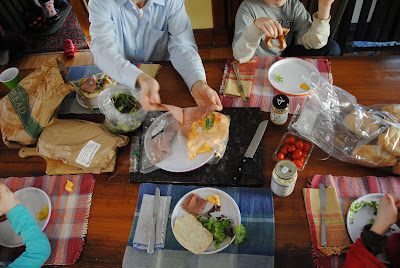 Monday supper. Bailey’s pick-up, so it’s a smorgasbord of local food. I always order with this supper in mind: bread, buns, pretzels, cheese curds, sandwich meat, greens, and today there were tomatoes, too. For dessert: butter tarts with pecans. Kevin did the pick-up and used the rejigged new/used stroller, which apparently runs quite well now. I took four kids to swim lessons, so we figured it came out even, especially because I’m still getting into the pool with CJ. Here’s hoping he makes the transition (our second attempt at the transition lessons). 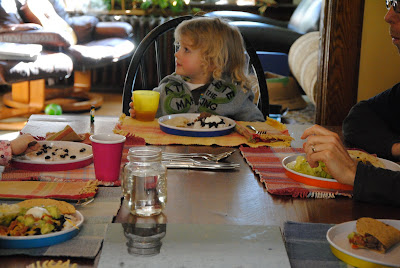 Tuesday supper. Black beans, hamburger, rice, taco shells, tortillas, guacamole, green salad, cheese, crema, hot sauce. And of course birthday cake for dessert. All the kids got the day off school, and we had lunch at the gelato shop uptown. I made one of my standard “meals for a crowd”: set up the food buffet-style, with options for everyone. Kevin made the cake, with help from Fooey and Albus. 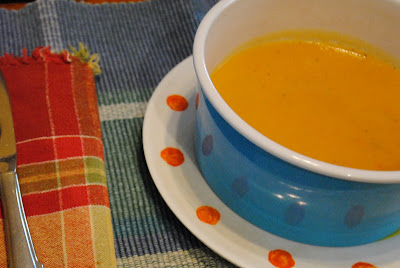 Wednesday supper. Coconut sweet potato soup in the crockpot. Wow, this was good. Well, I thought so, and Kevin did too, and AppleApple heartily agreed, and Albus gave it a ho-hum but edible rating. The two youngest refused. I’d make this again.

Coconut Sweet Potato Soup (crockpot version)
Peel and chop three or four large sweet potatoes and two apples and put into the crockpot. Carrots could be substituted or added (we have an excess of carrots right now). Add 10 cups of chicken stock, or veggie stock, or water. Add one can of coconut milk. In a small amount of olive oil, saute 2 large onions, chopped, and 2 tbsp ginger root, along with 1 tbsp of mild curry powder, 1/2 tsp cumin, and 1/2 tsp salt, and pepper to taste. Scrape into the crockpot. Simmer on low all day. Blend with an immersion blender, adding a couple of stalks of cilantro (I used frozen; optional). The juice of one lemon or lime can be stirred in just before serving (also optional). 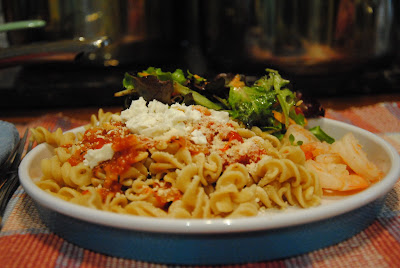 Thursday supper. Pasta with red sauce, and salad. This is my quiet day. I had some friends over in the morning and the little kids played and played. Albus went to a friend’s house after school, and AppleApple walked home with a friend. Kevin and I finished off the day with a kundalini yoga class. It’s always stressful getting everything done and peeling off a crying CJ from my leg, but once I’m in that calm, dark studio space, it feels entirely worth it. 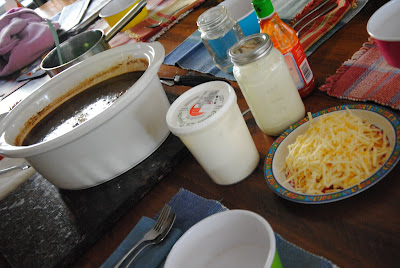 Friday supper. A crockpot recipe called “Mexican beans and rice.” It didn’t strike me as being very Mexican, however. “Mexican,” more like it. Basically, it was a black bean vegetarian chili with some leftover rice stirred in. Passable, but forgettable. Skating is now over, so the big kids walked home from school together (well, almost; Albus walked AppleApple most of the way, then ran back to his friends’ house to play, which he hadn’t okayed with me. We’re working on this independence thing. I was happy he was playing with friends, and AppleApple did pass along the plan to me, but the rule is that he needs to call upon arrival anywhere. A rule he has yet to put into practice. “You should just call me,” he says; which, of course, I do.) AppleApple had her last goalie camp of the session, and Albus had his last soccer skills, so we ate early and quickly. I enjoyed reading with the little ones, got them tucked in early, and met the babysitter secretively at the door. With all the peeling off of CJ I’m having to do lately, I wasn’t too keen to leave him with a new sitter; but decided instead, whether or not it was ethical, to let him drift off to sleep believing his mama to be somewhere nearby, ready if he needed me. But in reality, I was headed out for another kundalini class, and then on to a birthday party with Kevin. It all worked out. Home shortly after midnight. 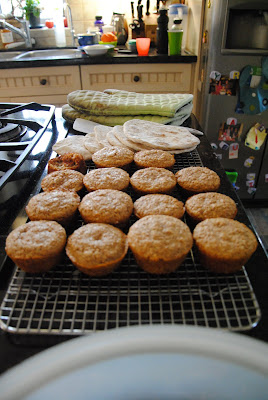 Saturday supper. We ate at a friends’ house, so I did not have to cook even one thing today. Kevin made the birthday cake that we took along. These are banana bran muffins, which I made on Sunday, in a baking binge of epic proportion. Saturday was a wonderful day off. I went for a morning run, and then a yoga class. We had a few drinks with dinner, and then I went out again to meet up with friends after the kids were in bed. I was pretty tired by the end of it all, and was summoned home just after midnight due to an hysterical CJ, who had woken and was not happy to discover it was merely daddy on-call. Glad that happened tonight, and not last night. Yeesh.

Banana Bran Muffins (makes 24)
In a large bowl, soak 2 cups of wheat bran in the following mixture: 2 eggs, beaten, 2 cups of milk, and 1/2 cup of honey. Let sit for 10 minutes. In a separate bowl, sift together 2 cups of flour (whole wheat is fine), 2 tbsp baking powder, and 1 tsp salt. Add 1 cup of mashed banana to the wet mixture (approximately 2 bananas). Gently combine the wet and the dry, stirring just enough to dampen the flour. Muffins do not respond well to over-mixing. Err on the side of under-mixing. Spoon into greased muffin tins, and bake at 375 for 20 minutes. 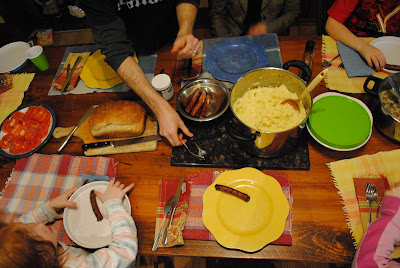 Sunday supper. Fooey’s meal choice: she wanted to make an “Albus Special,” which is mashed potatoes and gravy and meat all mixed together on a plate. We compromised, not having a hunk of meat on hand, and Fooey made the potatoes, Kevin grilled sausages and a piece of steak, and I made a mushroom gravy that was delectable, if not exactly child-friendly. I spent the day baking. I simply couldn’t help myself. I made waffles (with extras to freeze), baked bread and pitas, and those yummy banana bran muffins, and a batch of chocolate chip cookie bars from my own recipe on this blog, which felt just a little over the top even to me. All good. But not quite a day of rest. Or, I guess, my version thereof.

Mushroom Gravy (makes a little over a cup; double the recipe if you want more)
Saute in 4 tbsp of butter, one chopped onion, one clove of garlic, and several chopped celery stalks. Add and saute 3-4 cups of chopped mushrooms, and 1/4 tsp salt, 1/2 tsp thyme, pepper to taste. When the veggies are soft, add 4 tbsp flour and cook, stirring often, for 2-3 minutes, until the raw taste is gone. Add 1 tsp tamari sauce (optional), and 3 tbsp white wine (highly recommended). Cook off the alcohol, then add 1 cup of milk, and simmer gently, stirring often, as the sauce thickens. More milk could be added in 1/4 cup amounts if the sauce is too thick.