This morning: a good start to the day 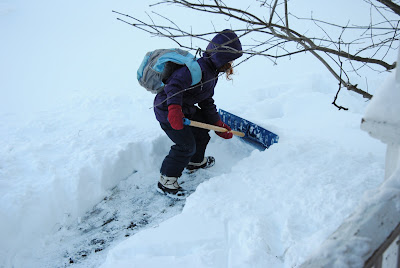 Two days ago, it was grey and cool and mild. All of this snow fell within about 18 hours yesterday. 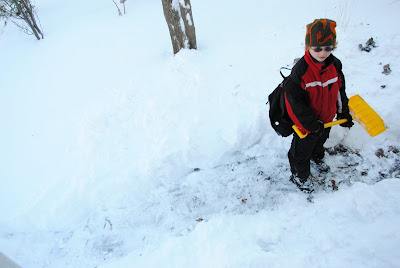 The older children apparently took my chat about responsibility to heart. Inspired by a specific garbage-dropping incident two days ago, I took the opportunity of all of us gathered for supper to explain that while I, as their mother, am happy to be responsible for many things, including feeding them and washing and folding their laundry, there were other things that were their responsibility. And then I threw the ball into their court: could they think of anything that was their responsibility more than mine? Albus instantly thought of cleaning up the water he always spills when getting himself a drink. AppleApple thought she could take her plate to the counter and scrape food into the compost. Socks in laundry basket, not chucked across the room. Banana peels composted rather than left on a bedroom floor to rot. Basic stuff, but helpful. (These supper conversations are our new version of family meetings–spontaneous topical conversations). Sometimes I feel like I’m talking to myself (though not always), but I do believe strongly that the kids are listening. Spontaneously, yesterday evening, Albus decided that shovelling the walk was something he could take some responsibility for. This morning, I found them outside early, both hard at work with school bags on backs. 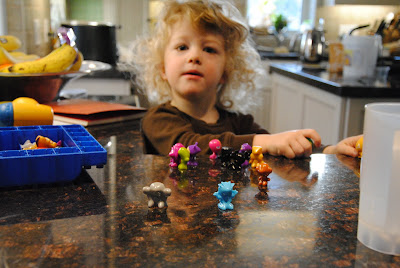 These are some of CJs favourite toys: Albus’s go-gos. Every single time CJ wants to play with them, he asks first: “It okay I play with Albus’s go-gos?” And every single time, I say yes, or Albus does. But he still asks the next time. Which is a good general policy, I think. Shows good little brother instincts. 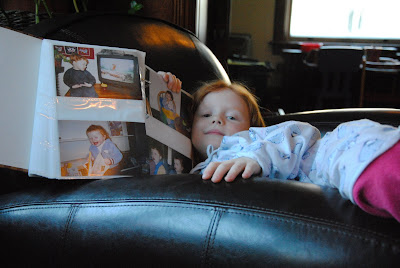 Fooey is on a photo album binge this morning. In this one, Albus is a two-year-old watching Winnie the Pooh on our old, tiny tv, and AppleApple is a baby. I actually said to Fooey, hey, that’s you! Before realizing it was my other red-headed baby girl. When they were babies, they all looked perfectly unique to my eye, but now that they’ve grown out of babyhood, I find myself looking for other cues–what era was this? where were we living?–to identify them in photos.

No photos of me. The eye woes continue, despite antibiotics–oral and drops–hot compresses, and following all of the dr’s instructions on care. All I can cautiously say right now is that they don’t seem to be getting any worse. But they’re not getting better either.

Actual conversation with actual child (who shall remain nameless)
Writing Day: Up