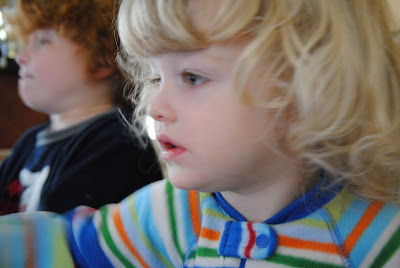 CJ’s newest excuse, when he doesn’t want to do something: “I too weak to do it, Mama! I too weak!” This applies to everything from picking up a game thrown in a fit a of pique, to walking instead of strollering, to climbing into a chair when he’d prefer to be helped. So far, I must say, it’s totally working. Who could resist helping a weak two-year-old?

CJ is also throwing more fits than he used to, a surprisingly endearing phenomenon. His feelings are much more sensitive than they once were. Yesterday, at supper, he crawled off his chair and stomped to the kitchen and declared: “I not eating supper ANYMORE!” No one knew what had happened, but he finally told us: Albus had been “interrupting!” With an apology from Albus, he climbed back into his chair and joined us again, entirely cheerful. His declarations of refusal are many, and are set off usually by hurt feelings, by someone telling him he’s doing something the wrong way, or by being ignored or not included, or not included in the way that he wishes: “I not eating cookies ANYMORE! I not be your son ANYMORE! You not be my mommy ANYMORE! He not be my sister ANYMORE!” etc. Maybe it’s because he’s my last, but man, I just love this stuff. It kills me.

Our house is so exquisitely trashed that I don’t have the heart to tackle the mess all at once. So today I decided to do one room at a time. I started with the office/playroom. Phew. One done. Next up: the dining-room, so we can eat supper together. AppleApple is going to cook with Kevin and they plan to make vegetarian lasagna with garlic bread.