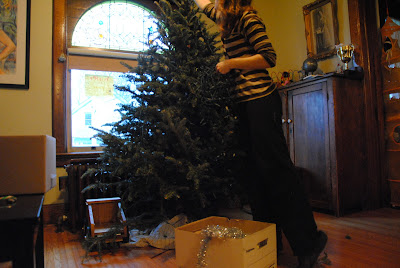 We survived another holiday season intact. Even the stolen stroller story had a relatively happy ending, as we bought what is now our THIRD sturdy bike/winter-tire stroller, a thankfully inexpensive find with help from kijiji. We also bought a major heavy-duty lock (approximately the value of our new/old stroller, come to think of it) on the recommendation of the kindly police officer who took down the report, and remembered me from the first stolen stroller incident, c. June 2009.

It felt like I didn’t get enough exercise or outdoor time during the holidays, but when tallied up, it was only marginally less than usual. Still, I felt off-kilter until yesterday morning, when I dashed off to the first yoga class of the year, followed by church, and it was back to the regular routine: there, I felt fabulous, grounded, much less growly, much more energetic. The late afternoon saw me baking a batch of bread, cooking tomato sauce from my canned tomatoes, making a huge pot of hot and sour soup from scratch, and a pizza, too, since the kids don’t like hot and sour soup. The kids’ lights were all out by 9. Kevin and I met for our usual Sunday night planning session.

It was good to take the holiday and realize that regular life is like a holiday. I have built into the everyday so many sustaining routines that I don’t feel a need to take time off or away. But I wonder: how to make room for magic and stepping outside of the bounds of everyday during the holidays. I struggle with that. It is hard to balance the work necessary to bring about such magic moments, with the peace necessary to enter into them.

These next two weeks will be different again as I am going on a writing binge. I won’t be with the kids as much, and meals may be served more often from the crockpot. The plan includes an earlier bed and an earlier rise in order to exercise almost every day, as a way of kick-starting the year.

I am testing out a new word for this year, and will report back soon after meeting with my word-of-the-year partner. She should be the first to know.

This end-of-year has been different for me. I usually spend a solid chunk of time on my birthday, which falls on December 29th, journaling ideas about new projects and goals, often quite major, dreaming big shifts and possibilities. This birthday, nothing of significance cropped up. I thought and thought, and scribbled a bit, and talked it over with Kevin, but only came up with this: more of the same, please! Keep writing, keep taking photographs, keep being with the kids, keep exercising, keep spending time with Kevin, keep going to church, keep spending time with friends, keep staying open to possibilities sent by the universe. It feels a bit strange not to have a list of must-dos and want-to-dos, but I think it’s okay. I am where I am.

May your year be filled with what feeds and sustains you, too–whether it’s new or more of the same. Blessings.