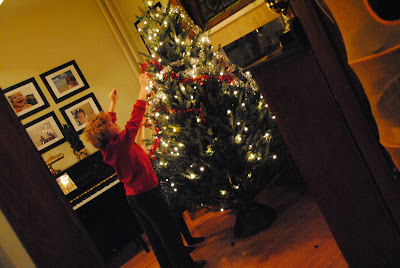 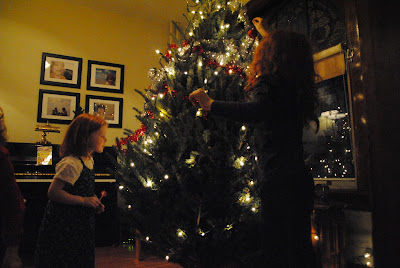 The wish lists are here! But I already got my wish: a packed weekend pulled off without a hitch. Kevin was working, AppleApple had a dress rehearsal and two shows, there was enough extra coordinating to give even the most organized among us pause, and Kev and I wanted so badly to make it till Saturday night, healthy, hearty, and hale–so that we could get down at the first xmas party of the season, an annual event that I pretty much look forward to as soon as it’s over, which includes enough dancing to last all year (well, almost). And we did!

Unexpectedly, given our late-night rowdiness, we got a tree today; AppleApple said she’d seen trees at the Dairy Queen, and she was right. The decorating begins shortly. Kevin is right now putting lights on a handy bush in our front yard; the first time in eight seasons that we’ve actively decorated the front of our house. Something about this year has made me want to get festive: light the darkness that marks early December as the days squeeze shut. The kids are thrilled. We had a spontaneous Christmas song singalong about an hour ago. I was almost beside myself with contentment: whacking out chords on the piano, everyone gathered around, singing. Sounds cheesy and staged, but it wasn’t: it just happened, and everyone was happy.

The wish lists … I tried to photograph them, but they didn’t turn out. Maybe I broke my camera taking all those photos last night …

So here are the transcribed versions. Please note, we encouraged the kids to dream big (and expect small).

Albus did a rough copy, and a good copy. This is the good copy:

to the north poal
dear Santa Claus
I will give you a list of what I want for christmas
1. socks
2. a wand that I get to help make in the north poal
3. coal for making snowmen
4. a camra [camera]
5. an emrald necklace
6. a painting of horses
7. a plain black witch hat
8. a poem book
9. riding lessons
10. a star wars lego video game
[arrow indicating that the list continues on the other side of the page]
11. a hamster or bunny
12. a shelf to attach on the end of my bed
13. pokemon cards
14. harry potter lego
I Have been mostly good this year exept for a few mean things I did to Fooey but I’m sorry.
Love AppleApple
Merry Christmas.

Fooey drew pictures of what she wants, and Kevin wrote down a list of what she’d drawn:
baby dolls
Barbie
dog
mitts
hat
fairy
silly bandz
I have been very good on this year.