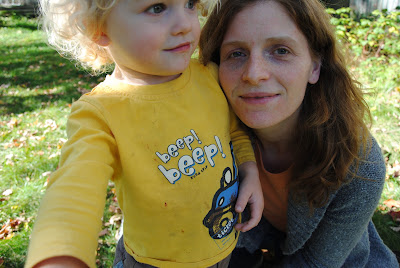 I am typing this in the office/playroom while the two littlest play Playmobil by themselves (with occasional mediation from me). In other words, I am basically ignoring them. I am not playing with them. They are fending for themselves, imaginatively. Is it possible that this good mothering?

Or is this good mothering?: Yesterday, while waiting in the hallway outside music lessons, I played with CJ. Within five minutes, I’d created a monster. He refused to play by himself. He roared when I attempted to converse with a nearby adult. Introduced to the high of mama-holding-a-Lego-guy-and-together-sliding-the-guys-down-mama’s-pantleg, he instantly progressed to attention junkie, incapable of sliding Lego guys down pantlegs all by himself. Yes, I looked with envy at the kid on the floor doing puzzles while his mother talked to a friend.

This morning, Albus called me “the worst mother ever,” and dramatically declared, at 8:28 AM, that his day had been ruined. Because I clipped his nails. Then I made him brush his teeth. Apparently, from the perspective of a nine-year-old boy, bad mothers insist on good hygiene.

Last night, while folding laundry on our bed, I initiated a conversation with AppleApple, who was also lying in our bed, reading a Harry Potter book for perhaps the 77th time. “How was soccer?” (She’d just come back from her first soccer skills session). “Fun!” “Wonderful! What was fun about it? Was there a particular drill that you liked especially? Did you know any of the other girls? What were the coaches like?” She was mostly silent, or monosyllabic, glancing up vacant-eyed from her book to respond. Finally, she gazed at me with deep weariness, and said, “Could you please stop asking all these questions so that I can read my book?”

To sum up: let’s just say I’ve resigned myself to getting some bad reviews, as a mother, while remaining convinced that I’m doing a reasonably good job. Is there any job on earth that is as controversial, as subject to criticism and debate, as judged on both a macro and micro level, as well as judged generally, ie. mothers are [fill in the responsible-for blank]?

Please note: this is an observation and not a complaint.