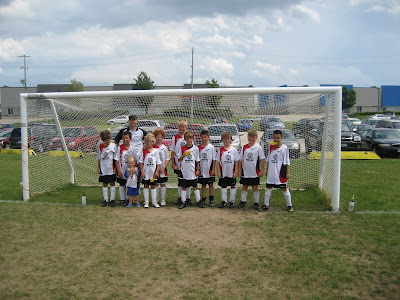 So, the soccer season is over. Albus’s team played hard and performed better than anticipated, but it wasn’t quite enough to send them on to the semi-finals tomorrow. Watching from the sidelines kept me happy; Albus is not the strongest player, and I felt less of a sense of responsibility and investment, and could enjoy the ebb and flow of the game more as a result. I was relieved that his performance wouldn’t make or break the outcome of the game. No one was counting on him for big goals. Kevin experienced an opposite effect, finding Albus’s games harder to watch than AppleApple’s, seeing all the missed opportunities that a bolder player would have taken. Maybe I should go to Albus’s games, and Kev should go to AppleApple’s, and we’ll all live happily ever after.
I see more soccer sidelines in our future. The grass is fine, there’s a big sky, and the non-playing kids entertain themselves with snacks and play. I’m almost–okay, not even almost, but actually–looking forward to next season.