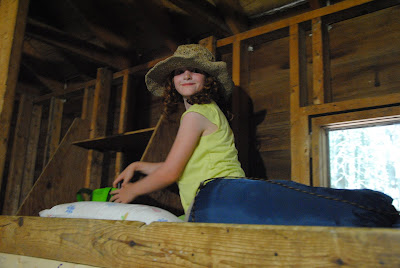 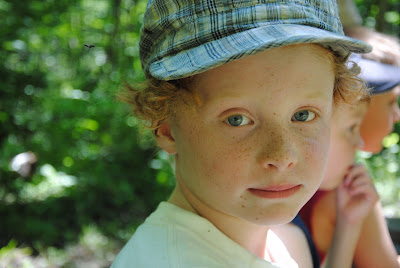 This summer, I’ve heavily loaded the front end of our summer holiday. Whether this proves to be a good idea or not has yet to be established, but at the very least, it will prevent the early lethargy and cries of boredom that marked the early days of last summer’s holiday.
Albus spent his first few days of holiday at home with us, and he was a changed person. He organized a self-monitoring system (“we all have to be honest”) to keep track of good and bad behavior. With AppleApple, he set up a stage in the living-room and organized a play that they plan to work on over the summer. He was, in short, a suddenly happy, thoughtful big brother, not the surly child we’ve seen so frequently in these latter days of the third grade. I think he must have been suffering more than we’d recognized, at school this year. He and I spent some time together, just the two of us, on Friday, and I asked him what he did not like about school, and he said that he didn’t like sitting still. Sitting still and doing work, because the work was boring–sometimes it was boring because he already knew how to do it, and sometimes it was boring because he didn’t know how to do it. Bit of a catch-22 there.
What most amazed me and Kevin was that these projects that Albus was organizing involved sitting down and writing. We could barely get him to write two sentences for his homework all year, and there it was: evidence of spontaneously occurring, self-motivated, parentally-painless application of literacy skills.
(We see this from AppleApple all the time; in fact, one of our projects last week–hers and mine–was to put together her newspaper, which is now completed! We just need to make copies, and possibly figure out how to post it online and link to it from the blog, to save paper and postage. More info on this soon. If you want a paper copy, send me a message).
:::
So, was it wise to send Albus off to overnight camp so soon after he was released from the bonds of school? The photos I took of AppleApple at camp yesterday show her busily arranging her bunk with all of her belongings (and she took her journal, so I expect new stories for the next edition of “Family Times” to be forthcoming). The photos of Albus, however, show him attempting to smile, then not even trying. His features and posture are transparent. He looks much younger in photographs. I could hardly stand to look at the photos last night, he looks so lonely and uncertain in them. I hope this was temporary. They were going to go swimming straight away.
I wonder–maybe he’s a homebody?
:::
I will see them both tomorrow, because I’ll be picking up AppleApple, who is only staying for two nights. She has a soccer tournament all this week and weekend. Albus has the choice of staying on till Saturday, and I really wonder, now, what he’ll choose.
:::
My two little ones: it’s just like a regular school day, on the days when Fooey is at home. Playing at the counter, colouring, writing. We have hired a neighbour girl to tutor Fooey and Albus this summer. Fooey is very close to reading, and eager to work hard on it–and I don’t have the time to feed her need as much as she’d like. She just spent a full hour sounding out words with our sweet, patient neighbour.
Albus was less keen to hear about the tutoring plan, but surprisingly accepting–we want him to keep working on his writing and reading this summer (which he may just do all on his own–who knew??); they’ll run multiplication tables together, he will read out loud, and work on writing an ongoing adventure story. After seeing Fooey’s appetite for learning this morning, I’m wondering whether half an hour, three times a week, will be enough for her.