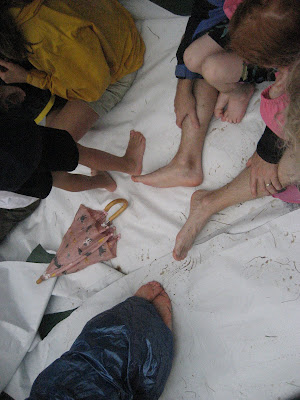 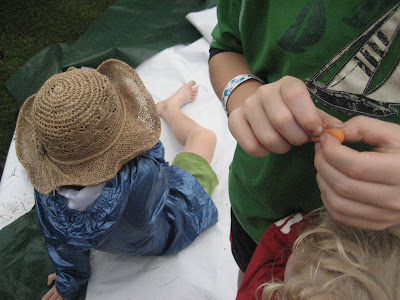 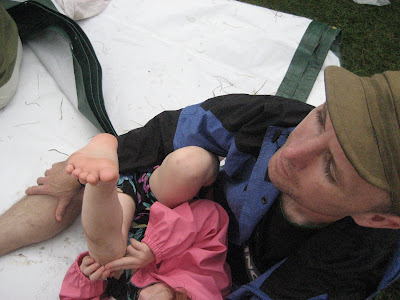 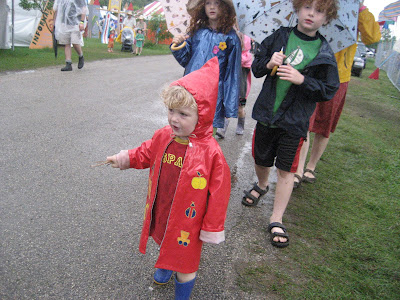 Tired. So tired, Kevin and I could have laid in bed with the curtains drawn till suppertime. As it was, we managed to sleep till after 9, with the children (those who were also not sleeping) playing video games on the computer. We’ve canceled the cable.

Writing week ended with a steady, sure march of writing. Wednesday, hump day, was the least productive outwardly, but led me to switch directions entirely with one story. Thursday and Friday were spent writing this new story from scratch. Monday and Tuesday also brought forth a brand new story. Neither were planned and plotted, but emerged. There is no other way to describe the process. I had planned and plotted two very different stories. Instead, the characters took me where they needed to go. In both, I felt as though I were merely observing and recording, rather than inventing. It allowed me to go places I would never ordinarily let myself go; the first story is deeply sad. Oddly, neither is remotely autobiographical; I say oddly because the early material that began these stories was rooted in autobiography. It’s gradually shifted so entirely away from autobiography that it’s given me a more confident appreciation for fiction, and for the way that the shape and haunt of fictitious characters can make sense of life in a way that’s not accessible to us in real life.

I don’t need to experience these things for myself in order to write about characters who do. I just need to be open, and to pay attention.

I have one more story to write. It may take weeks or months, with so much less time to give to it. This writing week made me question whether three hours at a stretch is enough; I do not think I could have written either of these stories in piecemeal fashion. To get there and to live there took going underground, and staying. I’ve decided that parenting and story-writing don’t fit together terribly well. Parenting requires being on the surface, available at any moment–go ahead and write a blog, while simultaneously being the on-call parent, but don’t try to dive for the story underneath. The focus itself is exhausting. I would find myself needing to take mini-breaks, not to plot ahead, but to breathe, to rest my mind. Very brief mini-breaks, I might add; just a couple of minutes. Maybe the way some people run/walk a marathon. And by suppertime each day, I felt spent of originality and syntax and emotion.

At the conclusion of writing week, we went directly to Hillside Festival, dragging the kids with us; an annual event for the past three years.
The best year was the first, when CJ was an infant, and I sat in the shade and nursed him and listened to music while Kevin wandered around with the three other kids. We didn’t stay long, just as long as the happiness lasted.
Last year, we went for two full days, and it rained almost non-stop, and there was a thunderstorm of epic proportions that shut the place down temporarily. We slogged through but it didn’t feel super-fun, and definitely wasn’t relaxing.
So this year we decided to go just for one day–Saturday–buying our tickets in advance (as one should; it’s a popular festival). As chance would have it, we picked the day that it rained–not dreadful stormy rain like last year, but rain that persisted into the evening. Albus complained that there was nothing to do, though he was free to walk around with a friend–a new independence. As I sat in a puddle and listened to Jason Collette with appreciation, and looked around at all the other parents with kids, I thought, what isn’t working about this for our family? And I concluded that none of our kids is remotely interested in sitting and listening to the music. And it is a music festival. Additionally, the festival has lost its novelty for us. It’s too familiar.

Well, and then something frightening happened, late in the day, during the last set for which we’d planned to stay–we lost Fooey. Not for long, but for long enough to send us into a frantic panic, our friends hunting the festival grounds, me sprinting in bare feet to the security booth with CJ in my arms and screaming at the security guard who seemed not to be paying attention–apparently, in a crisis I do not turn into a pleasant and patient person. I am mother-who-is-going-to-scream-for-help-until-her-child-is-found. She was found. She was not missing for more than fifteen minutes, at most, and had wandered off on her own (though we did not know that at the time). The crowds are so thick, it is easy to lose sight of one, especially when herding four. Kevin and I were both shaken.
“I don’t think I can do this again,” said Kevin, as we slogged out in the dark through thick mud to our vehicle. That part went pretty well, all things considered; I’d expected the kids to be beside themselves, and they were quite humourous and in good and willing spirits. In retrospect, it might have been my favourite part of the whole day. CJ walked the entire distance from the festival grounds to the parking area–a good kilometre or more through grass and mud. In the dark. By the time we found our vehicle (it was foggy as well as dark, and there were no lights), we were disgusting. We did not care; isn’t that the beauty of spending the day outside, no matter the weather? We found a tap and washed ourselves, climbed into the vehicle and prayed that we’d find a way out of the mud-field.
My first response to Kevin was: well, we could come back next year with no kids. But the terror and shock of losing Fooey, even for such a brief amount of time, is now forefront in my memory of this year’s Hillside, and I’m not sure I want to go back next year either.
I’ll sit with it.

Today, I’ve done piles of laundry (the sun is shining). I’m attempting to make kimchi–get a girl fermenting and she won’t be stopped. And AppleApple helped me make cheese bread, which will be baking in the oven for supper any minute now. Evening menu: cheese bread, red beets, green salad with fruit, and steak (we grill just one; everyone gets a bit, and no one wants more than that).
After watching Fooey and CJ scrub the garage floor with rags this morning, Kevin concluded that our kids are happy with very little; perhaps even happier with little than more, or much, or too much. Just give them a “job,” or let them rearrange the living-room, and the day is a success.
I’m back at full-time parenting tomorrow. Wish me luck.

Warning: This May Cause Side Effects
Like/Unlike