Bit of a mess around here … 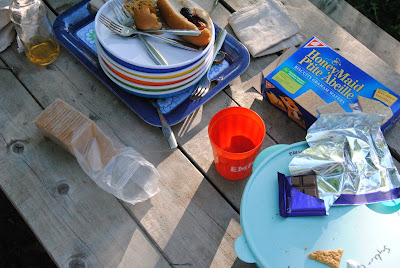 CJ is only pretending he wants to nurse, come night-time. What he wants is to get himself cuddled into my arms. He will then say, “Mama, I gonna tell you something!” (He pronounces something like some-sing.) And then he launches into elaborate made-up stories told at high volume, about little lions and little moths and sometimes Master Yoda makes an appearance. Books are thrown off of shelves. Little moths are “grumpy.” Little lions drink chocolate milk and are happy. Milk is spilled and Mama cleans it up and she says “thank you!” (Would that this were so).
Tonight, when I laid him in his crib (and he’s still up there, wide awake and protesting loudly), I said, “Goodnight, bub.” This sent him into paroxysms of hilarity. “I not bub, I CJ!” Just repeating the word “bub” had him in tears. The world is funny. Things sound funny.
:::
Tonight’s yoga class was killer. There was something in that room–anxiety, fear, something like that. It was really hot. And I was tired. And there were lots of people there, including some who were trying out hot yoga for the first time. A lot of people were suffering through the class, and it was easy to read on everyone’s faces and in their postures, including my own. But my problem was my mind. It just would not settle. I did not believe that I could manage, and over and over again I had to pull myself back to remembering that, yes, I could, and I have many times before. Toward the end, we all settled, somewhat, as the instructor found us a pose that brought us some peace with the inner turmoil. I recognized what I was feeling: I had been telling myself that I was feeling sadness, but I noticed that I was enjoying what I was feeling too much for that. Aha! I was feeling self-pity. Ugh. Do I ever hate self-pity. And there I was, wallowing around in it, making excuses. Now, this isn’t to discount the legitimacy of experiencing sadness. But there must be some way to experience it that isn’t indulgent. Self-indulgent. What is the point at which enjoying an emotion is a cue that it’s become not healthy? Aren’t some emotions there to be enjoyed?
I haven’t had quite as much energy recently. I wonder whether it’s more mental or physical. I’m not sure. But it is now nearly 10pm: all four children are still awake; AppleApple is weeping because she can’t find her Pooh Bear (just found him–phew!); Fooey is trying to sleep on a blanket on the floor because she’s a cat; the dishes are completely undone; I need to pack a picnic for the whole family for a “special people picnic” in honour of Fooey tomorrow; I feel the need to blog (talk about self-indulgent!); we have to take a snack for AppleApple’s soccer team tomorrow night, and have nothing suitable on hand; and we have no coffee in the house!!!! No coffee! Now that’s an emergency. I just sent Kevin on a quick run (in the truck; eco-confession) to the nearest grocery store, which is open till 10. There. Happy ranting.
Back to the dishes.