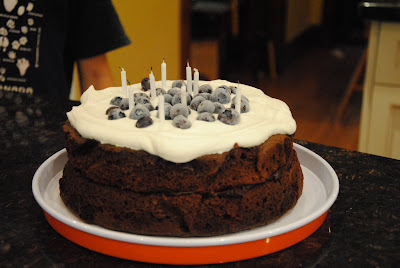 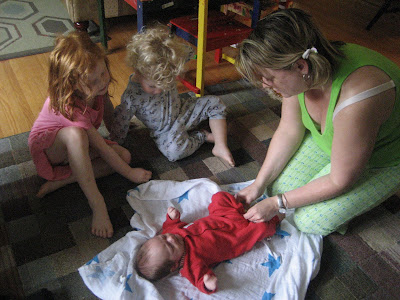 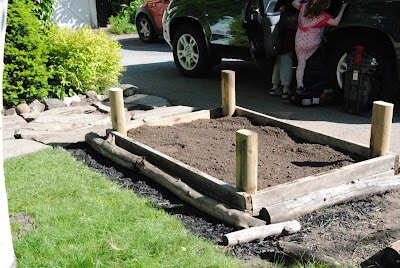 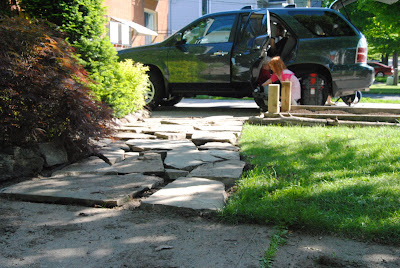 Our weekend involved more cake. I had not had time to bake in advance of Albus’s slumber party, so I thought, hey, this could be a party activity. It’s a credit to these sweet boys that they all said, “Yes!” when asked whether they’d like to make the cake. I decided to let them do as much as they wanted–read the recipe, measure the ingredients, dump, mix, beat the batter, work out amongst themselves who would do what. The resulting cake (sour cream chocolate) tasted fresh, light, and airy, and may have been even better than the previous evening’s cake. I should let children measure and stir every time.
The slumber party consisted of two guests (a third wasn’t able to come), no gifts, order-in pizza, cake, pop, a comic book shopping spree (Kevin had a blast witnessing the three boys making their excited decisions), and two movies. The boys set up the basement lair for themselves with three futons, but claimed to have all slept on the same bed, fighting for the same covers. They also reported being up till two o’clock in the morning (parents, I assure you, this could not have been true–we had the baby monitor set up in case of emergencies, and all was quiet after midnight … which is plenty late for three nine and almost-nine-year-old boys).
I got such pleasure listening to their party stories–how late, who had slept where, what they’d eaten for breakfast (chips and cheezies). After the guests went home, Albus appeared to be suffering from something resembling a hangover … lethargic, irritable, bored by everything. It’s hard for the party to end.
“All good things must come to an end,” I quoted cheerily last night as the children complained, at length and great volume, that “You’re ruining all of our fun!”
“Yup, that’s my job. I signed the parenting contract. I had to promise to ruin the fun, make my kids get enough sleep, force them to bathe and pick up their toys and throw their socks to the basement. It’s all in the contract. My hands are tied. What can I do?”
“Rip up the contract!” (That was Albus.)
The fuss was over bedtime. It was also over the end of the our long weekend. Listen, I was sad, too. Why must the fun end? Kevin and I got so much work done yesterday. I weeded the front bed, and trimmed the lilac (that was way too much fun; it was like giving a good haircut to a kid who really needs it … which, come to think of it, would describe Albus). Is that sad that I just conflated fun with getting so much work done? I even organized the linen closet (thanks, new Chatelaine; that may be the only good thing that comes out of the magazine’s re-design, in my opinion; so much saccharine fluff that I felt ill upon glancing through it, instant sugar-shock; and no Katrina Onstad, though I searched and searched; and this aside will be meaningless to all non-Canadian readers).
:::
There was more to our weekend. There was another party, and (believe it or not) even more cake. And that’s our new nephew pictured above with CJ and Fooey (photo by AppleApple), who visited from afar with his mum and grandma. And Kevin built that cool-looking box for the front veggie beds, and got the stones partially laid for our new walkway. Among much much else.
But I have a CJ on my lap stabbing me with a pencil, and a Fooey lying on the floor beside the stool shouting, “You’re wasting time for me to get dressed! When I even need you to get me dressed! I want a dress! You have to come upstairs, okay Mommy! Even if you say no, you have to come upstairs! This instant! I’m s’pposed to already be dressed in a dress!”
Yo. I signed the contract. What can I do?