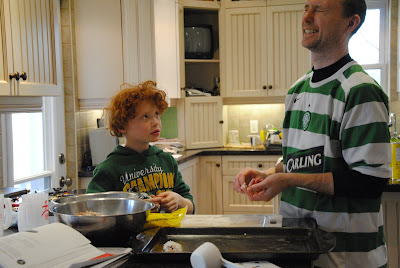 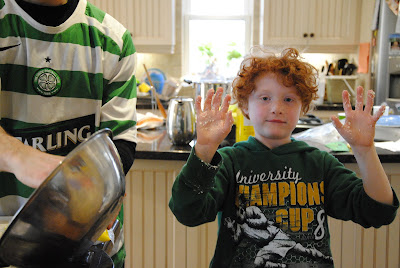 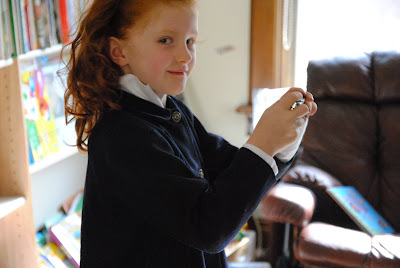 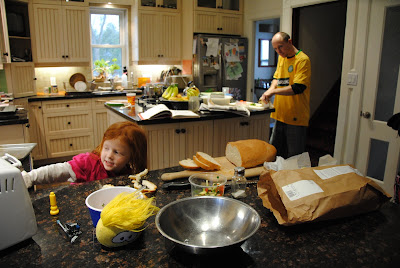 Not sitting here with the inspiration to write. But look at these photos. Yesterday, Kevin and Albus cooked the evening meal together: coconut chicken with baked rice, bouillabaisse, and fruit smoothies for dessert. Last Sunday, Fooey and Kevin cooked French onion soup (above, Fooey is monitoring the progress of the toasting bread in the toaster oven). Their other memorable meal item was a cheese and fruit plate for dessert.
I also had to include this photo of AppleApple wearing her Grandma Linda’s jacket–from when Grandma Linda was a little girl. It is hand-sewn, though I’ll have to ask who did the sewing. AppleApple disappeared into her own mysterious world yesterday, dressing up in the jacket, and a white collared shirt, a black bubble skirt, and tights, and pushing her hair off her face with a band. She looked so beautiful. I found her sitting on her fabric box in the girls’ bedroom, serene and lost in thought. I never found out what she was thinking, though it looked like it might have been sad. I sat on the floor, asked my questions, received no answers; and so sat quietly just watching her. I thought about how there will be so many things that she does and thinks that I will never know, and though it was difficult, I understood that I would respect that distance, not scrabble to break it. As long as she knows I’m here if she needs me. (The photo was not taken at that moment, but later in the afternoon when she was busy taking photos of her own. The other day I heard her camera beeping, and realized she was setting it up on the 10-second delay so she could take self-portraits. Um …. And Albus has been taking photos and making movies, too, on his own–very old–digital movie camera. No shortage of documentation at our house. The only trouble will be narrowing our evidence down to a few iconic images, which is all that ever lasts; if even that could be said to last, in a family’s memory, for however long a family remembers).