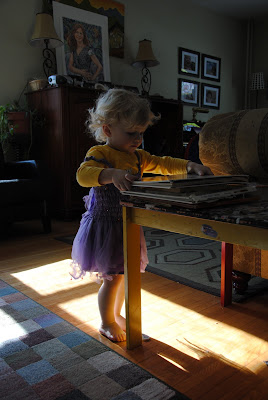 Chili in crockpot. Children off. House quiet. This is my morning. I sometimes think it is my favourite three hours in the whole week, but these hours couldn’t exist as my favourite if it weren’t for all the other hours filled with noise and choas and needs to be met.
A few mundane updates … (Now there’s a sales pitch. Readers read on!)
1. Swim lessons. Latest term completed. Fooey passed, again. She’s now passed this class twice. It’s called Sunfish. She has an aversion to the next level which is called Crocodile. If it were up to her, she’d do Sunfish again. I might just let her, till she’s five, and can take other classes not named after aquatic animals, but placed in sensible numerical order. Neither of the older kids passed, again. They are pursuing their Master’s in Swim Kids Five. Albus was sure that he would pass, but wasn’t perturbed to discover that he hadn’t. I said I’d eat my hat if he passed. Maybe that’s not a kind encouraging motherly thing to say. But they thought it was funny. I’ve watched them swim. AppleApple looked decent. Albus looked like he’d regressed; though yesterday he seemed to have improved. There were a couple of kids in the class who could actually swim (this is not usually the case), and I think this is the level where they really try to make sure the children have the technical skills before passing them on. The comments are always unintelligible to me, a non-swimmer. Whip kicks, and arm and hand position, and etc. And as a non-swimmer, I aspire to have children who can actually swim. I love the way real swimmers look, cutting through the water.
2. Family meeting. It was a good one. We passed the “talking necklace” this time. Basically I just grab a smallish nearby object that can be thrown across the countertop. Strawberry cheesecake gelato. Good discussion of a wide variety of topics, including piano lessons, and setting goals. Both older children agreed, in theory, to continue with piano lessons next year. I would like them to reach a level of proficiency before they can decide to quit, but haven’t figured out what–Grade 3 conservatory? Grade 6? We have figured out a way to convince them to practice. It’s not (quite) bribery. Every day that they complete a practice session–ie. play every song assigned to them for the week, and practice for about ten minutes–they mark it on the calendar. We add it all up and when they’ve reached 60 days of practice, each one gets a reward. For Albus, it’ s a Star Wars Lego ship (an inexpensive one). For AppleApple, it’s her horse lessons (never inexpensive, unfortunately, but of equal value emotionally). Albus skipped yesterday, but has otherwise been very faithful. AppleApple has been additionally motivated because she passed to the next level of piano books, and the songs are “more meaningful,” to her, as she told us last night at the meeting.
Good meeting.
Good grief. I should have a 3. to complete this list, but feel I’ve gone on long enough. And the house is quiet! And I have work to do within this quiet! Other than blogging. Which isn’t work. At all.
Wait–I have to do a 3. It’s CJ. The photo above is from one of our afternoons this week, when he didn’t want to wear a diaper for awhile. And he had toileting success (followed 45 minutes later by a suspicious puddle on the kitchen floor which he pointed at with some excitement: “Water! Water, Mama!”). Best of all, diaperless, he wanted to wear the purple princess dress that is too small for anyone else in the family.